Historical
Diana Rubino
Mary Anne is a friend of mine and a historical author. The Du Lac Chronicles are set in King Arthur's time. As a huge Arthur buff (the play Camelot by Lerner & Lowe being my favorite of all time) I devour any book with Arthur's name on it! 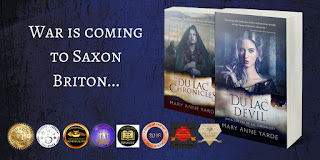 Island of Glass
Joseph of Arimathea stood on Golgotha Hill and watched, with a broken heart, as Jesus died on a wooden cross. When they finally lowered Jesus from the cross, Joseph felt compelled to offer Jesus' family the use of his tomb, so that they had somewhere to lay Jesus' broken body. 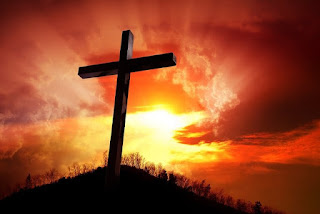 Picture of Cross ~ Pixabay
It is hard to imagine what was going on in Joseph's mind that day. To give up his grave was no small thing, but his love for Jesus and for what he stood for, meant more to him than his final resting place. 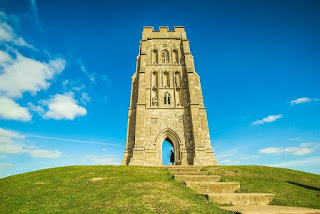 Glastonbury Tor, believed as a portal to another dimension
Photo: Pixabay
But then a miracle happened, and Jesus rose from the dead. The tomb was again empty, but Joseph's heart was full of wonder. He became a disciple and spent the rest of his life wandering the world and passing on the teachings of Jesus. 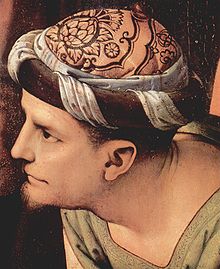 Joseph of Arimathea by Pietro Perugino, a detail from his
Lamentation over the Dead Christ. ~ Wikipedia
It came to pass that Joseph and a group of friends sailed to a distant land called Albion. They followed the River Severn as they travelled inland and finally they found themselves in The Summer Lands.
The Summer Lands were only accessible during the summer months for grazing cattle and sheep. In the winter the water would reclaim the land and all that would be left was a very large hill, seemingly floating in the middle of this great flood. The water reflected the hill and because of this the Celts called this place Ynys Witrin —The Isle of Glass.

Galahad, Bors and Percival achieve the Grail. Tapestry woven by Morris & Co ~ Wikipedia
Joseph and his friends climbed one of the smaller hills that surrounded the largest hill. Joseph lent heavily upon his thorn-wood staff, as he tried to catch his breath from the climb. He decided to name the hill, Weary-A-Hill. Joseph thrust his staff into the damp earth and then sat down to rest.
That night an angel visited Joseph in his dreams. The angel told Joseph that this land was his future. It would be his new home. 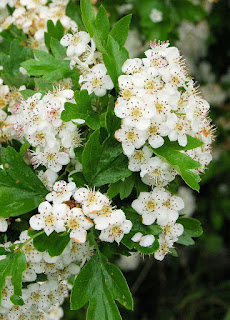 Hawthorn flowers ~ Pixabay
Joseph awoke, refreshed, as did his friends, but much to their surprise the staff had taken root. New shoots shot out from the once smooth wood. Theses shoots would soon grow into strong branches. The buds of leaves were already forming. This was a miracle. This was a gift from God. There was no doubt in Joseph's mind.
Weary-A-Hill was owned by a rich nobleman who had no time for the stories of this Christian deity. Neither did he have any use for the hill, for it was too steep to farm. In a gesture of goodwill, he told Joseph he could build on the hill if he so desired.
Joseph took the nobleman up on his offer and build he did. But it wasn't a house for himself — it was a house for God. He built a House Of Worship. In fact, it was the first Christian Church ever to be built.
And then people started to come. At first, the odd few strangers turned up, but people were drawn here, answering a silent call. Soon Joseph had a healthy congregation, and yet, still more people came. 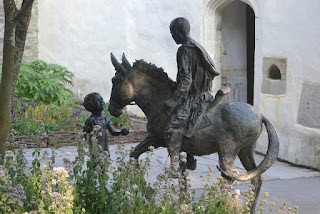 The Pilgrim (Glastonbury Abbey) ~Pixabay
The Angel had been right. Joseph had found his home in what was once a strangely foreign place. He had no need for his tomb that he had given up for Jesus all those years ago. It was said that Joseph was buried on the Hill, although the exact location will forever remain a mystery. The church that Joseph built was rebuilt over the centuries. Times changed, but one thing has always remained constant and that is the Thorn tree. As regular as clockwork, the thorn blossoms every year at Easter and Christmas. 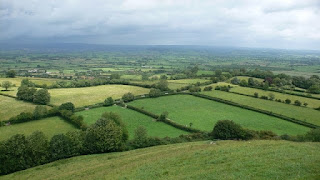 The Somerset Levels (The Summer Lands) ~ Pixabay
Many travelled to see this miracle tree. Many compared it to Jesus' Crown of Thorns.
The Island of Glass, a forgotten name for a kingdom that inspired many legends. In the years that followed the name would change and it would become known as the Isle of Avalon.

This isn't the end of the story, far from it. Joseph's staff was not the only thing he brought with him from the Holy Lands. It was rumoured that he also brought with him a vessel. A precious cup. A beautiful Grail.
The Du Lac Chronicles series 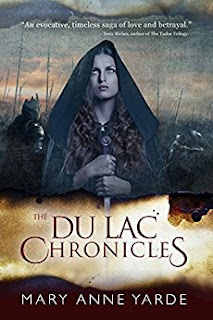 A generation after Arthur Pendragon ruled, Briton lies fragmented into warring kingdoms and principalities.
Eighteen-year-old Alden du Lac ruled the tiny kingdom of Cerniw. Now he half-hangs from a wooden pole, his back lashed into a mass of bloody welts exposed to the cold of a cruel winter night. He’s to be executed come daybreak—should he survive that long.
When Alden notices the shadowy figure approaching, he assumes death has come to end his pain. Instead, the daughter of his enemy, Cerdic of Wessex, frees and hides him, her motives unclear.

Annis has loved Alden since his ill-fated marriage to her Saxon cousin—a marriage that ended in blood and guilt—and she would give anything to protect him. Annis’s rescue of Alden traps them between a brutal Saxon king and Alden’s remaining allies. Meanwhile, unknown forces are carefully manipulating the ruins of Arthur’s legacy.

Purchase The Du Lac Chronicles on Amazon US

About Mary Anne
Mary Anne is an award winning author of the International Best Selling Series — The Du Lac Chronicles. Set a generation after the fall of King Arthur, The Du Lac Chronicles takes you on a journey through Dark Age Briton and Brittany, where you will meet new friends and terrifying foes. Based on legends and historical fact, the Du Lac Chronicles is a series not to be missed.
Born in Bath, England, Mary Anne grew up in the southwest of England, surrounded and influenced by centuries of history and mythology. Glastonbury--the fabled Isle of Avalon--was a mere fifteen-minute drive from her home, and tales of King Arthur and his knights were part of her childhood.
Contact Mary Anne
Website/Blog
Facebook
Twitter
Goodreads
Original link