1944 – ALEC EDWARDS’ world was opened up when he fell in love with JEAN FRANCIS. From the quiet confines of his orderly museum where everything was catalogued, labelled and recorded, he had been propelled into the chaotic realms of romantic attachment. This was during the Second World War, a time of air raids, bombings and rationing. Then the ‘worst’ happened. Alec and Jean were in the museum after hours when the air raid sirens went. Alec, ever the vigilant curator, was loathed to leave his precious collections out of its case and vulnerable and insisted on finishing the job. Jean is less than impressed and a dispute ensued and just as she is in the middle of delivering a right royal ear bashing when the bomb lands….. 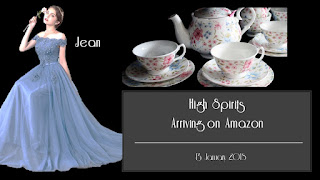 In this post, we’re going to meet JEAN FRANCIS

When and where is the story set?

The story begins during the war with the prologue to set the scene as to how Alec and Jean met and fell in love before their untimely demise. It then moves onto the present day and picks up on the characters that work in the museum – Bethan, Patrick, Sal, Billy, and Seth. Unbeknown to them, their every move is being observed by three very mischievous ghosts.

What should we know about her?

Jean loves life. She’s only 21 and had a job as a secretary in the law firm of Clipper, Clipper and Boughton. She likes to go to the Roxy on a Saturday night and dance, although it’s not what it was before the war! She enjoys putting on a special dress and doing her hair for a night out. She’s from one of the prominent families in Plimpton Market, although they have been somewhat snubbed due to a scandal decades before.

She doesn’t take to dying very easily (well, who does?) and feels lost and out of place in the museum – which by her own admission, she’d never stepped foot in prior to her courtship with Alec.

It’s taken Jean some time to adjust to eternity especially as Alec revels in being in his beloved museum 24/7. Her transition has been helped by the presence of Pol and gradually she began to view the museum as her home into which she welcomed visitors –even if those visitors couldn’t see her.

She often wonders about her relationship with Alec and whether she would have managed his proclivities if they’d lived. Sometimes, she wishes she could move on.

What are her personal relationships like and how do they shape her character?

Jean had been brought up in the knowledge that her family, although with a stain on their reputation due to the affair of an ancestor, were something in the town. Her parents were of independent means, although her father expected both her and her sister, Violet, to earn a living. She’d been given the job of secretary on the back of her father being a member of the local Freemasons lodge so she’d never really experienced hardship

Her relationship with Alec came as a surprise to her friends and was frowned upon by her family who hoped that one of the daughters would marry into one of the still socially respectable families and thus restore their own reputation by association.

Alec really wasn’t the type that one would image Jean being attached to but there you go – love is blind!

Seventy-something years have not dulled her love of Alec but revealing herself to Bethan opens her world up far more than if she had lived and given her something to hold onto.