1944 – ALEC EDWARDS world was opened up when he fell in love with JEAN FRANCIS. From the quiet confines of his orderly museum where everything was catalogued, labelled and recorded, he had been propelled into the chaotic realms of romantic attachment. This was during the Second World War, a time of air raids, bombings and rationing. Then the ‘worst’ happened. Alec and Jean were in the museum after hours when the air raid sirens went. Alec, ever the vigilant curator, was loathed to leave his precious collections out of its case and vulnerable and insisted on finishing the job. Jean is less than impressed and a dispute ensued and just as she is in the middle of delivering a right royal ear bashing when a bomb lands…..

In this post, we’re going to meet POL a child of the Iron Age. 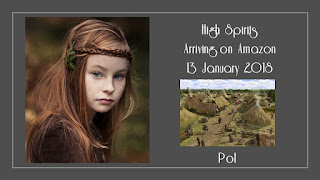 What should we know about her?

Pol was born to the leader of her clan and lived with her extended community just outside what became Plimpton Market in an area today known as Miller’s Field.

Her clan is part of a wider tribe under a tribal leader.

Pol saw the coming of the Roman army into her world and watched as peace broke down between her father and the local detachment of soldiers. This led to the murder of her clan and propelled her father and his warriors into a bloody ambush in which the detachments of soldiers were all executed.

Pol is a powerful spirit through age and because in life she had special abilities that marked her out for a place in the class known as Vates or seers. Sadly for her, she was used as a sacrifice to the gods in an attempt to thwart the Roman incursions.

She has greater abilities than either Jean or Alec and can manipulate and use everyday objects at will. Her favourite thing is playing games on Seth’s iPod, much to Seth’s chagrin as he can’t work out who is doing it.

Pol has little in the way of conflicts to deal with because she has had a huge span of time to come to terms with her situation. She was on the land before the first house was built on the site and saw the rise and fall of many properties.

Pol enjoyed living in a family home and seeing the comings and goings of family life. When the last owner died and the house became a museum she felt at her lowest but the arrival of Jean and Alec put an end to her loneliness.

What are her personal relationships like and how do they shape her character?

Pol had a loving relationship with her parents even though her life was brief. With the coming of Jean and Alec, Pol has found herself a family again and they very much act as a family unit in that respect.

She often defers to Jean or Alec even though her wisdom exceeds theirs. Pol knows a dark secret about the museum and, unknown to either Alec or Jean, she is shielding them from it in order to protect them.

When the trio reveals themselves to Bethan, Pol finds herself quite comfortable with the curator and spends much time with her in the office.