In the 13th century, monks in Burgundy were in the habit of taking a spoonful of vineyard dirt and taste it to assess the quality of the vineyard.
Or so they tell me.
Me, I am a geologist, and I’ve seen colleagues taste oil to assess its maturation, so I’m not surprised at anything anyway. 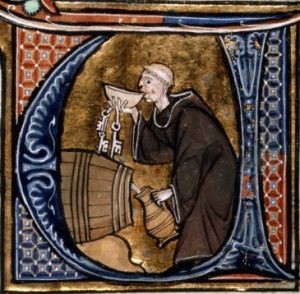 The interesting fact is this: in Medieval times, French monks had lots of land at their disposal, and in Burgundy they had set up vineyards as far as the eye could see. The climate was favorable, and the monks liked their wine anyway.
But a monk back then had a lot of spare time to observe nature, and so the good Benedictines and Cistercians started noticing trends. Vineyards that were more productive, vineyards in which a certain kind of vine thrived while another suffered, and so on.
They started calling these different parcels of land terroir – and started experimenting to define what made one parcel different from the next. Hence, the idea of sampling and tasting the dirt.

Today, in my experience here in the vineyard hills of Monferrato, the word terroir is used chiefly by two categories of people: pompous wine snobs and geologists.
Me, as I said already, I’m a geologist.

And I’ve grow tired, and somewhat peeved, by the fact that while there’s a lot of chinless, limpwristed poseurs babbling away about terroir without knowing jack about it, I’ve so far been unable to give a proper lecture on the subject – and it’s been eight years now that I’ve offered my services to local wineries.

So out of frustration, I decided to write a book on the whole story – from dirt-munching French Benedictine monks to the current climate change risks to the wine market. A short, sweet, clear and straightforward introduction to what a terroir is, and how climate and geology determine the taste of your wine.
No small feat, for a teetotaler.

The book will be out, hopefully, next week – both in Italian and English, both through Amazon and Smashwords.

In the meantime, some are wondering how come a teetotaler – if one living smack in the middle of a vineyard country – ended up studying the geology of wine.
Believe it or not, it was because of Vincent Price and Peter Lorre, and very tangentially, Edgar Allan Poe…