My kingdom for some proper bread!

Self-Help
Samantha
Proper bread is hard to come by in our green and pleasant land. When I say proper bread I mean real bread. The best bread I ever tasted was in West Berlin in 1984 before the Wall came down. My very wonderful German boyfriend, Burkhard, lived on the sixth floor in an ancient building with no elevator. How we managed to climb up those stairs after trawling the bars of West Berlin until dawn drinking too much schnapps, remains one of the great adventures of my youth. Our debauched lifestyle was fuelled by enormous breakfasts German style: soft boiled eggs, ham, industrial strength freshly brewed coffee and rye bread with onions, served in thick slices and copiously buttered. The toaster is a very British obsession but both the Germans and Dutch, I have observed, prefer untoasted rye bread. I searched high and low around the world for rye bread with onions and never found it. A few years ago I ran into a Berliner and asked him about the famous bread of my dreams. He replied that it was still available but churned out by the supermarkets in a hybrid, watered down version that resembled nothing like its ancestor I had fallen in love with. I make a version of it now and then but my recipe is not authentic as I'm a lazy kneader; kneading dough is best done by men with huge, strong, hands which I don't have.

In my pursuit of easy, nutritious proper bread, I usually settle on a compromise which involves making rolls not loaves and instead of rye using a mix of one half white flour and one half spelt. These flavorsome Spinach rolls are a favourite of mine- I invented the recipe when faced with a bag of spinach and time on my hands- very unusual and only on a Sunday afternoon. I eat the rolls warm with butter, with bacon, or a sharp cheddar. Spinach and eggs are a marriage made in Heaven so try the rolls sliced in half with a poached egg and Hollandaise sauce.

Rinse the spinach leaves in a colander.  Heat the oil in a pan over medium heat and add the butter and the chopped garlic. Brown the garlic lightly then add the spinach, nutmeg, pepper and salt. Cook over high heat uncovered, stirring occasionally until the spinach has wilted and all liquid has evaporated. Set aside to cool.

Mix all the ingredients together in a large mixing bowl. Squeeze the spinach to remove excess liquid then chop it coarsely and add to the bowl of dry ingredients. Add 1 1/2 cups of warm water and mix with a wooden spoon until the mixtures comes together. If it is too dry, add a splash more water. Remove from the bowl and turn onto a work surface. Sprinkle a bit of flour onto your hands and knead the mixture until it it is springy and forms into a ball without any wet dough sticking to your hands. This should take around 7 minutes. Return the dough to the bowl and drizzle some olive oil over the top- this will prevent a crust forming. Cover the dough with a damp tea towel and place in a warmed oven (pre-heat the oven at 100 degrees then switch it off before placing the dough inside). Leave the dough to rise for 45 minutes until doubled in size and light and springy to touch. Knock the dough down and cut into half, then quarters and then eighths. Form into balls and place the balls in a lightly greased shallow oven dish. You should get 8-9 nine rolls altogether. Pack the rolls tightly against each other as this will help them to rise. Cover the rolls and leave them to rise for fifteen to twenty minutes. Pre-heat the oven to 250 degrees Celsius. Place the rolls in the pre-heated oven and bake for twenty minutes then cover the rolls with a piece of foil to prevent burning and return to the oven for a further thirty minutes. The finished rolls should be crispy on the outside and soft and light inside. Remove from the oven and cool on a wire tray. Serve warm with butter. The rolls will keep for up to three days in an airtight container. 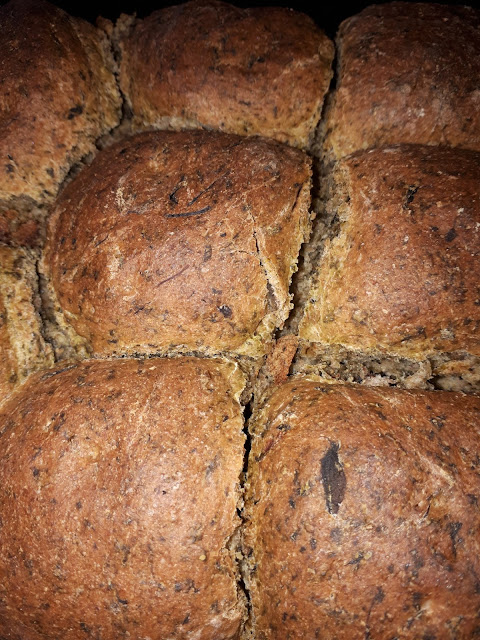