New book on the market for the erotica lover with all things naughty... Sugar Plum'd by Leon Mauvis 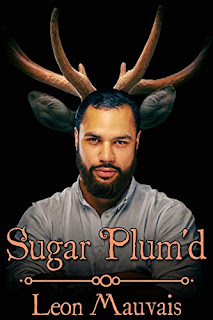 Sugar Plumb'd is 21,500 words.
It's a BDSM, Fantasy/Scifi, Suspense,
Action/Adventure, Multiple Partners,  Mystery, Thriller, Shape-shifters, M/M Romance.
It's a holiday adventure about love blooming between enemies turned allies.
It's like "Rudolph" & "50 shades of gay" meets "Mad Max" at Santa's workshop!
LONG BLURB:
As a young were-deer, all Pembroke has ever dreamed of is being harnessed to Santa’s sleigh. Yet his world comes crashing down when Santa’s slain.
A war erupts in the Arctic Circle-pitting elf against reindeer. Pembroke is sent on a perilous mission. If he fails, his herd will be lost. When the mission goes awry, the stag-shifter must put his trust in an unlikely ally. Where does one turn in a land of ice and blood?
What happens when the enemy infiltrates your heart? What begins as a wavering alliance, takes both stag and elf farther than they both could ever imagine.
SHORT BLURB:
It’s the North Pole’s final carol. Santa’s been slain. A war’s erupted, pitting elf against reindeer. When a young weredeer’s mission goes awry, he must put his trust in an unlikely ally. Who can you trust in a land of ice and blood? An unlikely alliance sweeps Pembroke past the polar skies and all he’s ever known.
EXCERPT:
“I hear,” Kassel’s whispers filled the empty stalls of the barn, “the *Toy-Maker* can be quite demanding.” Pembroke didn’t care. He would prove himself.
He arched his back as if he was getting ready to be harnessed to the sleigh. His shoulders back, Pembroke held his head high. His flanks rising in the air as if supporting an uplifted tail.
As if he was still in stag form.
“No.” Kassel said, “Like I’m *really *Him.”
Pembroke felt the rough sole of Kassel’s foot against the broadest part of his back. Pembroke was caught off guard by the pressure. His face forced down, Pembroke felt his haunches rise till his ass, like a halved plumb, split open for the Toy-Maker’s inspection. Pembroke flinched as he felt the weight of a large buckle fall between his shoulder blades. Kassel dragged the cool metal down Pembroke’s spine, resting it on the small of his trembling back.
Kassel paused only for a second, before dragging the metal even further, splitting his friend’s cheeks, teasing the soft pink skin of Pembroke’s puckered hole.
Without thinking, Pembroke let his shoulders take the weight of his prostrate body as his fingers lifted to spread his cheeks further apart.
He felt Kassel’s hot breath blowing across.
“Now how many days till you guide my sleigh?” Kassel asked.
Thwack.
A sting blossomed against Pembroke’s hole. It leapt away as fast as it came. A bolt of lightning zapping through his body.  The pain surprised him so much that he hadn’t heard the question.
Thwack!
There it was again.
Buy Links: JMS Books / Barnes and Noble / Amazon
About the Author:
"Sugar Plum'd" is Leon Mauvais' debut! He's a beret-wearing sprite who fell asleep in the cornfields of Pennsylvania. He dreams in the husks, hoping his tales taste like taffy, but help build crystallized armor. Once, he lingered in the corners of the last used bookstores searching for forbidden adventures on exotic worlds.
Original link