New for pre-order: Women in Medieval England, by Lynda Telford 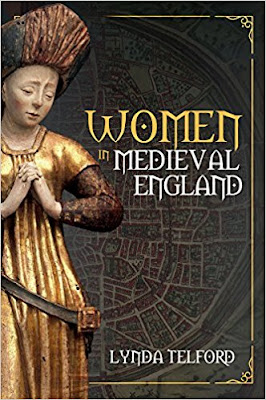 Available for pre-order from Amazon UK and Amazon US
This fascinating book explores the status of women in medieval England, both before and after the Norman Conquest.
The author starts by contrasting the differences in status between Anglo/Danish or Saxon women with those who fell under the burden of the feudal system imposed by the Normans. She covers such subjects as marriage and childbirth, the rights and responsibilities of wives, separation and divorce, safety and security and the challenges of widowhood. She also examines such issues as virginity and chastity and the pressures placed on women by religious groups.
At a time when women's rights were minimal, the author charts their struggles against the sexual politics of the era, its inequalities and its hypocrisies. She also examines the problems of the woman alone, from forced marriage to prostitution. The lives of ordinary women are the centre of attention, painting a fascinating picture of their courage and resilience against the background of their times.
# # #
About the Author
Lynda Telford writes historical articles and is currently Events and Projects Officer for the Yorkshire Branch of the Richard III society. She has had two books published and she is a keen amateur archaeologist.
Original link