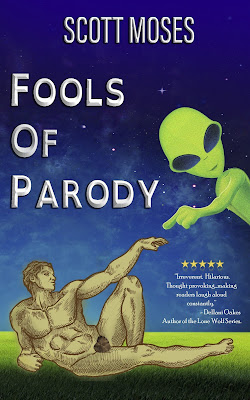 Hey Everyone!! :-)
The lovely and talented Karina Kantas is here today to tell you all about a new book by a friend of hers. Karina, take it away! :-)
Karina:

FOOLS OF PARODY
Book release
Book Blurb:
Given the choice to wipe-out humanity and turn the world over to Earth’s higher life forms or give humans one last chance, what would you do?

Aliens Anu and Matrona are pissed. Since their last visit to Earth 2000 years ago the world is more intent on destroying itself then ever before. Teaching seven ordinary people the tools to save their world they give humanity nine months to clean up their act. There will be opposition but good must prevail over evil or else! Can the human race learn to love each other and appreciate life? Or will dolphins become the predominant life on Earth?
Author Bio:
The Laughing Warrior Scott Moses is the author of the reviewer acclaimed novel “Between Truth and Eternity”. His turn-ons include taking long hikes with his dogs, jello wrestling, and homemade chili. Turn-offs include mean people and driving behind someone with their blinker on for five miles. He lives among the majesty and clean air of the San Francisco Peaks.

Excerpt:
Hundreds continued to arrive into the sacred grounds each day. Communities of like-minded pilgrims sprang up sharing their tents and food with anyone who asked.

Cable channels catering to science and science-fiction lovers canceled their programs in favor of broadcasting 24-7 from the site. Interviews with scientists, authors, spectators, and former abductees interspersed the actionless action. The continuous TV coverage kept many would-be trekkers at home.

Two of the more memorable interviews happened at the beginning of the week. The first occurred when a reporter spotted the owner of a national fast food chain. A social network video of him and his family killing an elephant while on safari in Africa elevated him to a loathed anti-hero. Asked why he was there, the owner replied, “God made man superior to all other life. Plus, I got some bad press when I killed that dumb animal. Let’s see what they think of me when I kill these space people.”

Traditional news stations battled for the best positions to view the gleaming space vehicle. Finance TV told their viewers 100 different ways they could make money from the event. By the end of the week, the State of Kansas made U.S. Route 281 a toll road between the city of Lebanon and the landing spot. Proclaiming the ship a state landmark, they charged fees for entering and camping in the park.

Interest among TV viewers started to decline. Stations devised new ways to keep their audiences interested, but the lack of action made the broadcasts as exciting as airline food. Losing viewers by the score, the news outlets had to think of ways to keep the interest before their ratings dropped further and exploded on the sidewalk like a bag of soup thrown from the Empire State Building. As one producer put it, “It ain’t doing nothing. It just fuckin’ sits there.”

The media’s long-time solution of making stuff up and presenting their fecal matter as truth served them well. Throwing their crap into a yard spreader known as “the news,” they continued to fertilize the seeds of fear and ignorance continuing their quest of splitting the world into separate but equal hate groups.

Aliens, Dolphins and the human race - what could go wrong?