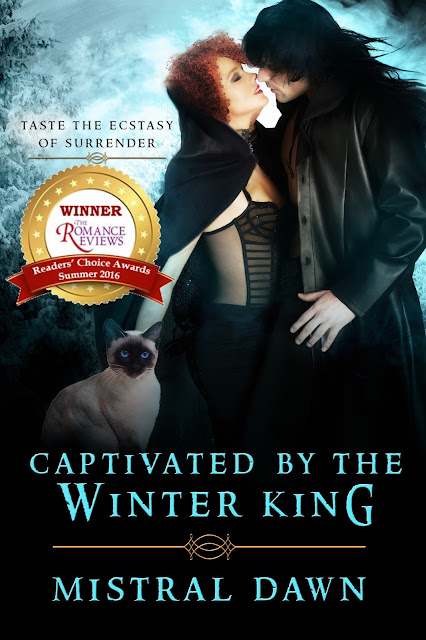 If you have pets, I'm sure that, at some point, you've come home and just known that they've been up to something?  You may not have known what, exactly, but you'll find hints and clues here and there, and when you look at them, they seem to have inscrutable expressions that you can tell are hiding something.  Well, here's a peek at a time the King of the Winter Court of Fairie went through a similar experience.

Excerpt from Captivated By The Winter King:
Ankou had been looking forward to seeing his Anamchara all day. He hoped to be able to interest her in a new game. Imagining her tied up and awaiting his pleasure had him hard and eager. So he was a bit disappointed to find their quarters empty except for her animal companion.

Seeing the note sitting on the desk, he picked it up and read it. She was going to a Duergar village to observe a trial? Was she going by herself? Did Tairise know about this? He sent for his friend to see if ta had any more details.

As he waited, he thought about it. She was queen, so she had the right to go anywhere within the kingdom that she wished and take a personal interest in any court proceedings that caught her attention. It wasn't as though she needed his permission. But he thought they were developing the type of relationship that would at least allow him to expect that she would inform him of her intentions in person. It would have been the courteous thing to do, and Kate was nothing if not unfailingly polite. Something about this seemed…off.

Was this something that she just became aware of? He could understand why such a case would pique her interest. With her history, it made sense that she would want to make sure that a female who had been murdered by an abusive male received justice. Had she acted on impulse? She wouldn't be foolish enough to try to travel alone, would she? For all her youth, he had never seen her do anything that wasn't well planned out and considered.

The more he thought about it, the more the situation disturbed him. He paced back and forth in the center of the front room of the quarters he shared with his Anamchara and made a list of people he would speak with if Tairise didn't have the answers he needed. Megaera watched him from the safety of the couch, swishing her tail in time with his movement. He looked at her. "I don't suppose you know what's going on?"

"Burrruuoopp!" she responded and jumped from her perch to stalk off into the bedroom.

Ankou couldn't help but grin. It seemed he was driving all the females in his life away. When a knock sounded at the door, the king's response was sharp, "Enter!"

Tairise opened the door, slipped through, and nodded to tas king. "You called for me, my friend?"

Handing the Elf the note, the king asked, "Did you know about this?"

After reading the brief missive, Tairise looked at the king, tas eyebrows raised, "No. And I have to say, I'm quite surprised. This doesn't seem like her at all."

"I didn't think so either," the king brooded. "I'll need to speak with Louarn next. If she decided to go on a trip, he would have arranged security for her."

Tairise nodded, "That makes sense. While you speak with him, I will question the maids. Perhaps they assisted your Anamchara in packing."

With a plan in place, the two of them headed to the door. Before they could head off on their respective errands, Megaera emerged from the bedroom batting a small object across the floor. When she looked up from her make-shift toy and saw them getting ready to leave, she picked the object up in her mouth and carried it over to Ankou, spitting it out on his boot. "Mmmmruumm. Raaoowup!" she said.

Stooping down, the king picked the cat's offering up off his foot. Looking at it, he realized it was a scrap of black fabric. He sniffed it and recognized a scent. Turning to Tairise, his eyebrows raised, he asked, "Do you have any idea why Duibhne would have been in here?"

"No." Ta held out his hand for the shredded cloth. When Ankou handed it over, ta sniffed it as well. "But you're right, it is hers." Ta looked at the cat and reached down to pet her. "I wish you could tell us what you know."

Winding in between the two Fae's legs, Megaera purred and basked in the attention.

"Do you think Kate would have asked Duibhne to accompany her to the Duergar village?" asked the king.

Tairise shook tas head. "I don't think so. That female has been trying to ingratiate herself with the queen for weeks, but your mate saw right through her. I can't think of a reason Kate would decide to trust that trouble-maker all of the sudden."

"That was the impression I was under as well," mused Ankou. "But I'm at a loss to explain this," he held up the rag.

"I think, when we speak with the guards and servants, we will also need to ask them if they know where Duibhne is."

Nodding, the king added, "Her, or her brother."

When Megaera realized the people were leaving, she gave them a disgruntled chirrup and sauntered back towards the bedroom. Before she left the room, she looked back over her shoulder and met Ankou's eyes.

The king looked at the cat whose gaze bored into his own. He knew there was more going on than he was seeing, and for some reason he was almost certain the animal was trying to tell him what it was. But for all their mutual desire to communicate, Megaera's secrets remained concealed. He frowned, disappointed. Why did felines always have to be so mysterious?

Hmm... Why, indeed? Aggravatingly enigmatic feline. ;-)  If you'd like to find out what secrets Megaera was hiding, you can read all about it here:

Thanks so much for stopping by today, and don't forget to check back tomorrow for the latest in Mistral Dawn's Musings! :-)
Original link