In the past week, what with being forced to stay at home in isolation and all that, I decided to put some order in the growing pile of books, magazines and other papers that are slowly but steadily taking possession of my house.
We have been on a permanent state of warfare with a rat, in the last few weeks, and piled-up paper is not a good thing.

And in this way, while digging on a long-forgotten shelf, I found a few re-issues of old volumes of L’Eternauta, an Italian magazine that in the 1980s published color and black and white comics by Argentine and other Spanish-language artists and the occasional American or French story. It was built along the same lines of Metal Hurlant/Heavy Metal, and it was the gateway for many long-standing passions of mine – first of all for artists such as Carlos Trillo or Juan Jimenez, or Vicente Segrelles.

I have talked in the past of how Segrelles‘ strange science-fantasy series The Mercenary – with its medieval, Renaissance and Arabian Nights influences – was for me the very first meeting with something different from classic, Asimov-style SF.
And so, finding those old re-issues – big black volumes that reprinted five standard issues of the mag – I started browsing, and going down to memory lane.

I had bought the lot for real cheap, second-hand in a flea market, paying probably 1 euro per copy, back in the early 2000s, and then buried them on a shelf.
And there, while trapped once again in the wonderful art of Segrelles, I found something that I had missed at the time – somebody, armed with a fine-tipped black marker, had censored all the topless ladies in the color section, defacing not only Segrelles’ illustrations, but also a few of Corben’s.

And I tried to imagine that mysterious person, over thirty years ago, that slowly and painstakingly set out to draw black ink bras to cover the nipples of all the ladies in those comic books.
Was it some kind of feminist Situationist sabotage, drawing bras on naked comic-book women?
Or just a sign of old-fashioned pruderie? 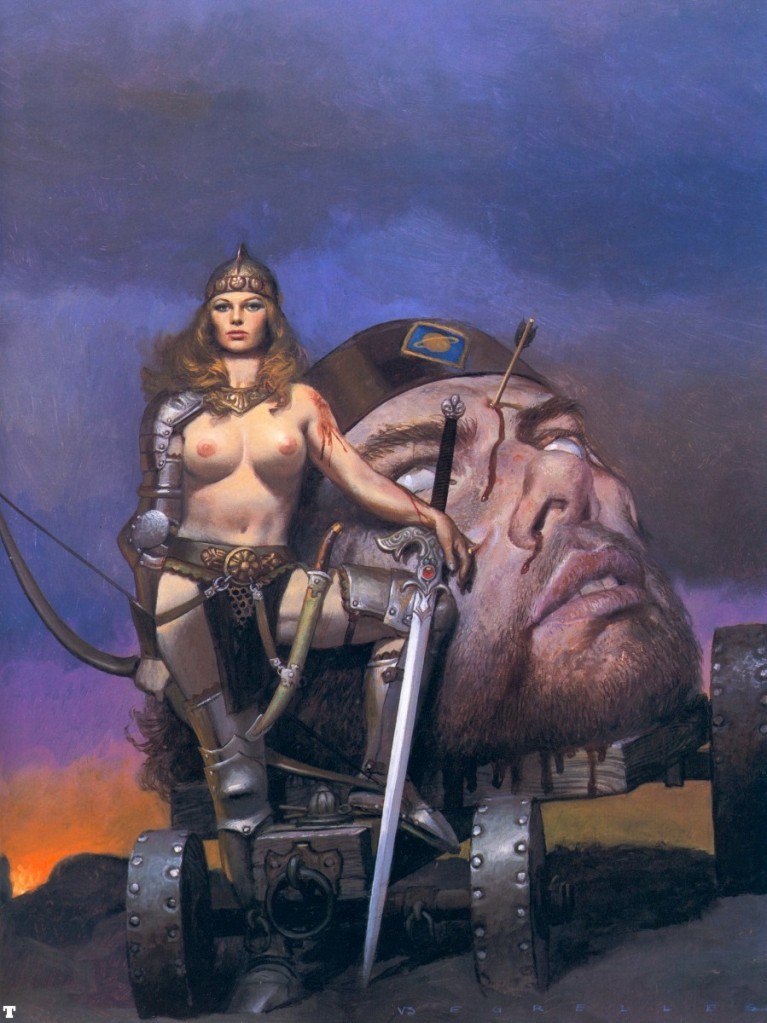 I don’t know why, but there is a story, hidden in these scrawls…

And then I went and re-read all the Mercenary comics I had here in the closet, because … ah, because I grew up with this.
But The Mercenary will be the subject for another post.