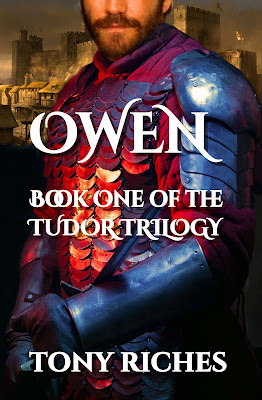 Available from Amazon UK and Amazon US
Based on the true story of a forgotten hero, OWEN is the epic tale of one young man’s incredible courage and resilience as he changes the course of English history.
England 1422: Owen Tudor, a Welsh servant, waits in Windsor Castle to meet his new mistress, the beautiful and lonely Queen Catherine of Valois, widow of the warrior king, Henry V. Her infant son is crowned King of England and France, and while the country simmers on the brink of civil war, Owen becomes her protector.
They fall in love, risking Owen’s life and Queen Catherine’s reputation—but how do they found the dynasty which changes British history – the Tudors?
This is the first historical novel to fully explore the amazing life of Owen Tudor, grandfather of King Henry VII and the great-grandfather of King Henry VIII. Set against a background of the conflict between the Houses of Lancaster and York, which develops into what have become known as the Wars of the Roses, Owen’s story deserves to be told.
Original link