There is a concept in imaginative fiction that has been intriguing me ever since I learned of its existence: pariah elite.
I found the definition in the classic Encyclopedia of Fantasy by Clute & Grant:

A group which, though despised and rejected by society, remembers and preserves the secret knowledge necessary to keep the world from ultimate Thinning. In other words, members of PEs are despised and rejected precisely for that which they retain: their knowledge of the Secret History of the World, their Talents, their memory of the Elder Gods, their familiarity with the old True Names and the real Map of the territory (which allows them to escape the minions of the false king), their direct descent from the Elder Races, their memory of the way through the Labyrinth, their access through Portals to the Golden Age … But they sometimes do more than retain the past; it is always possible that the PE may be the Secret Masters of the world.

A lot of stories I enjoyed as a young man discovering fantasy and science-fiction hinged on the idea of a pariah elite: the Morgaine Books by C.J. Cherryh and the Birthgrave books by Tanith Lee, the old Foundation books by Ike Asimov, the Uplift books by David Brin in which the whole of humanity is sort of a pariah elite. 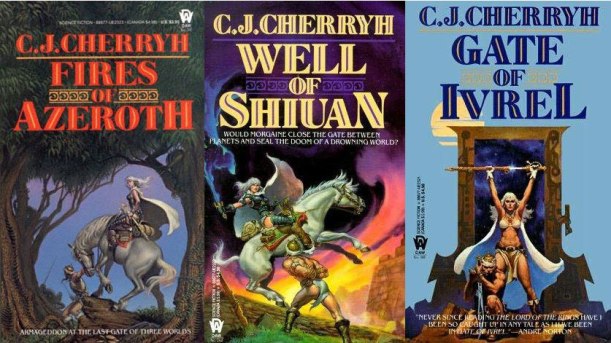 I sometimes toy with the idea of writing something based on this idea.
Not the usual child of destiny story, in which some characters finds out they were destined to be king/savior/whatever. Not that, because I usually find it boring, and slightly offensive.
No, I imagine a world so skewed and twisted that those that retain an old knowledge, and possibly the keys to survival, are mistrusted, despised and feared.
It would be fun.
I’ve been juggling this idea and the idea of a science fiction story that plays like fantasy – like Roger Zelazny used to write.
Something with a post-apocalypse theme.

I heve been imagining a future world in which the collapse was caused not by a nuclear war or by a virus, but by a memetic infection – ideas spreading that led the civilization to collapse.
Like, distrust of science, believing the Earth is flat, fear of medicine and vaccination.
Now, hundreds of years later, humanity lives in a world in which there is no certainty, no fixed rule.
A nasty, brutish society in which might makes right.

In this I want to bring my pariah elite.
People that kept the fire of rationality burning, and now find themselves in the role of the bad guys.

It would be interesting.
But I’d need to find a way to also make it fun, and exciting, and entertaining.
It will be something for the long winter nights.
Let’s leave the ideas time to settle down and take root.