Phantom of the Opera Challenge – Day 15

We are halfway through the challenge now, and today’s post is going to be a little different from the others.

I have seen some outstanding portrayals of Raoul, notable among them being Andrew Ragone, Hadley Fraser, Storm Lineberger, and Ramin Karimloo.  Today, though, I want to write about a Raoul whom I never saw onstage but who became a friend during a dark and difficult time.

Byron Nease (1954-2013) played Raoul for 1,700 performances in Canada.  Colm Wilkinson played the Phantom, and Rebecca Caine was Christine.  His rich baritone can be heard on the Canadian cast album.

I met Bud, as he asked his friends to call him, via Twitter.  My first POTO novel, In The Eye of The Beholder, had been released by Turner Maxwell Publishing in the UK and I was promoting it.  I was also dealing with some deep depression issues, to which I suspect I may have alluded.  I was followed by someone calling himself StageStar, and when I checked out the profile, you could have knocked me over with a feather.  I was very much aware of who Bud was and surprised that he would follow someone like me.

Nevertheless, there we were.  He started sending me little encouraging notes, or sometimes just asking how I was doing.  One day, he asked if he could have a mailing address to send me some CDs.  By then we had been talking for quite a while and I knew more about him.  I knew that he’d been living with HIV since 1985, and that he had struggled as a young man with being gay.  He came from a long line of conservative preachers and it took him a while to reconcile his faith with his sexuality. 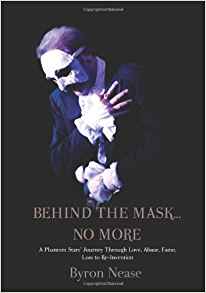 He was also a very frank person.  His memoir, Behind the Mask … No More, tells some of the stories he shared with me, and more.  He talks about taking curtain calls in Mame as the older Patrick and going to clean houses so that he could afford his New York apartment.  The cover shows him as Erik in the Yeston/Koppit “Phantom,” while the title refers to the things he learned about himself in a production that mirrored his real life, having to present one face to the public and another in private for so many years.

One of the things he said for which I was most grateful came when our family had a rather large financial emergency.  I was looking at the bills in despair and Bud told me that he often went through that; at the time we met, he was working three part-time jobs to make ends meet while he cared for his aging father until that gentleman’s death.  He had to figure out which part of the costly drug cocktail that kept him alive could actually be afforded at any given time.

“Bills,” he said, “are information, not condemnation.”

It was a piece of advice that I have passed on to many friends.

After Bud’s father died, he moved to Hawaii and contact became more sporadic.  He attended the Unity Church at Diamond Head, and was often the soloist during services.  Their podcasts frequently featured his voice, and I enjoyed them very much.

Bud moved back to the mainland in 2013 and became a voice coach.  The kindness and encouragement of his master classes was a joy to behold.

And then, suddenly and unexpectedly, he was gone.

I miss him every single day, if the truth be told.  He was that gentle “pen pal” who became a trusted friend.  I cannot tell you how grateful I am for those CDs he sent to me, because that means I can hear his deep, beautiful voice whenever I want to.

Byron Nease was everything a romantic hero like Raoul should be:  handsome, kind, strong in times of adversity, and gentle with friends.

My friend, there will never be a day when I don’t think of you.