The joys of Youtube.
I’ve spent the last few nights watching old episodes of the BBC’s Blake’s 7, a space opera series that aired between 1978 and 1981, and that was never distributed in my country.
And I must say I’m positively impressed. 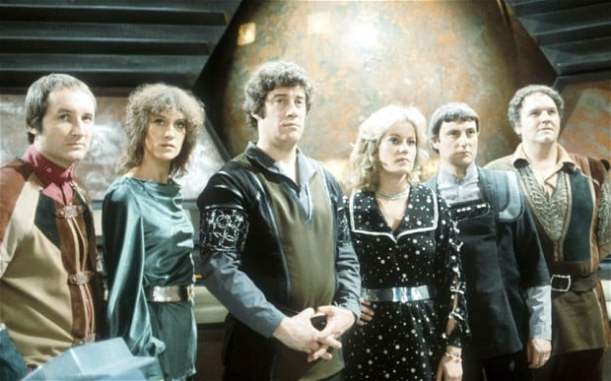 Because it’s an old show, and produced on a very short and frail shoestring budget, but what the heck, it’s good fun and great storytelling.

The basic concept in a nutshell: in the far future, humanity spread through the galaxy and Earth is the core of a tyrannical Federation that uses drugs, brainwashing, torture and death to preserve the status quo. Blake was a leader of a dissident movement, and through various misadventures ends up on a ship carrying prisoners on a prison planet.
The transport chances upon an alien ship adrift in interstellar space, and when the skeleton crew sent on board disappears, the captain decides to send on board a prisoners boarding party, to act as miner’s canaries. Blake and his two companions survive the defence systems of the ship and run away with it.

Now, think about a cliché in space opera, and you’ll find it in Blake’s 7.
But it’s not the pieces that make the show that count, but the way in which they are assembled.
When this series came out in 1978 it was obviously compared to Star Wars (the show and the movie opened the same week), but really Blake’s Federation is a lot more sinister than the Empire ever was, tracing its roots to authors like Huxley and Orwell. There is a very 1970s British sort of pessimism to the show.
As for the band of rebels, Blake’s companions would give Han Solo a run for his money, as the initial crew includes a smuggler, a corrupt engineer, a pathological thief, a murderer and a guerilla fighter.
Basically, a bunch of guys that couldn’t care less about fighting the evil Federation, stuck with a leader charismatic enough to drag them along. But Blake also comes across as a fanatic at times – he’s the good guy, but his hatred for the corrupt Federation sometimes gets pathological.

Indeed, the dialectics between idealism and cynicism are one of the main themes of the series, and make for some pretty good dialogue and characterization.
As the video I linked above rightly says, this is a mix of old style pulp adventure, space opera, politics and sarcasm, and it works like a wonder.
Also, it features one of the best bad guys ever to grace the video, Jacqueline Pearce’s Servalan.

Then ok, the effects are dismal, the whole confection is as cheap as they come, but the actors are good, the chemistry is great, and one actually gets curious about what the writers (Terry Nation first and foremost) will come up with next.

All in all, a much welcome diversion, and food for thought about matters such as storytelling, character development and dialogue.