Romance
Uvi Poznansky
“You deceived me,” he complained.
Which she dismissed with a shrug. “You let yourself be deceived.”
The gun swung away from me as he turned to face her.
She ordered, “Drop it!”
He did.
“Raise your hands!”
He didn’t.
Instead, with a squeak of his boot, he took one, two, three steps forward and shrieked, at the top of his lungs, “Spion! Spy! Spy!”
With one more stride, he was at arm’s length from her. Assuming, perhaps, that she would be easy enough for him to handle, the SS officer flung out his arm and tried to snatch the revolver from her hand.
I leapt off, forgetting I could barely advance with my legs chained. I steadied the weapon and pointed it at his heart—but it was already too late. Before I could pull the trigger, she sprang to his side and with a steady hand, pressed her revolver right there, against his temple.
In an instant, there came a sound. It was somewhat muffled by the whoosh of wind, the rustle of leaves across the canopies, the screech of crows, and the Maxim silencer that was fitted onto the barrel. Watching a puff of smoke floating off from it and the slight backward bounce of her hand, I realized: Natasha had shot him.

Lenny in Marriage before Death 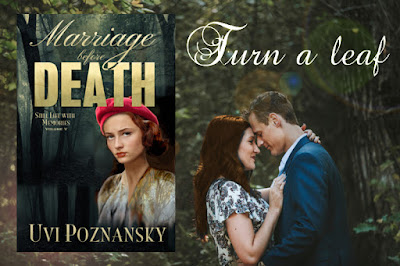 "Uvi is a masterful storyteller that will draw you in to her stories and leave you needing to go back and read all the rest of these books in her series."
- Angela Kate, Author