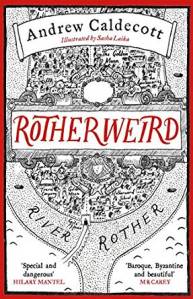 I have just finished a fun novel called Rotherweird, written by a gentleman called Andrew Caldecott.
First in a trilogy, I got me the ebook in one of my recent sprees, while stacking up for the winter.
I was curious, and I was lucky – the novel is a blast.

The blurbs compare it to Harry Potter, which is obvious (it’s a story set in England but not in London, and it features magic and a school, so it obviously compares to HP) and absolutely misleading.
Rotherweird is fun, fast and built on such a complex bundle of weirdness that poor Harry would get a terrible headache out of it.

The premise: in the 16th century, in England, a bunch of gifted kids are born on the same day. Queen Mary would have them killed as the Devil’s spawn, but when Elizabeth ascends to the throne, they are just tucked away safely in a secluded valley in rural England.
Here things get weird, as the place they have been sent to hides some ancient mystery from the druid’s time, and soon the kids start dabbling in all sorts of dangerous stuff, under the guidance of a sinister individual.

But that was then and this is now.
Rotherweird is a city lost in the British countryside and enjoying a unique freedom from the laws and the rules of the land.
A town filled with eccentrics with strange names, in which studying history is forbidden and where gifted individuals attend a strange school.
This is where Jonah Oblong, awkward and bumbling historian, is hired to teach the somewhat limited History curriculum.
But soon Jonah meets other characters, and the lose strands of ancient mysteries get tangled up with more recent strange occurrences.

As I said it’s fun, and really what you could call a page-turner.
If a defect must we find, it’s the finale, that seems a little hasty – but this being the first book in a series, it’s probably to be expected.
Will I get the two following volumes?
Certainly I will, but not straight away.
I have a lot of other stuff to read.
But if you happen to find a copy, check out Rotherweird. It’s probably what urban fantasy should be.