Here's a joke waiting to be told: a Tudor historian, a blogger, and a podcaster all walk into a bar and ...
... can't pay the bill because all they have with them are groats?
... spend five hours trying to redecorate the place, but in the end decide they like it how it is, but just want new ownership?
... start a fight over the drink Bloody Mary?
All completely possible. But the correct answer is ...
... And the Tudor Summit is born!
The Tudor What now?
The Tudor Summit. Ten talks spread out over two days featuring leading names in Tudor history. If you read blogs, books, or listen to podcasts about English history, I'd be willing to bet you've come across these names before. And it's all online, so there's no need to travel. And it's completely free!
So why a Tudor Summit? Let me explain.
Back in 2009 I started the Renaissance English History Podcast because I thought that podcasting would be a good thing to know. This was back when podcasting was very new, and there wasn't a lot in the way of history podcasts. I've had large gaps in my podcasting as life took over, but it's always been this constant in my life that I return to time and again, and it brings me such joy to connect with others who are enthusiasts about 16th century England.
One thing I see is that those of us who are passionate about this time period are often passionate in our own little bubbles. We spend a lot of time in our books. We read a lot of blogs. And we voraciously listen to Melvyn Bragg postulate on In Our Time. One thing we don't spend a lot of time doing is talking to actual people. Alive ones. In real time.
It's one of the paradoxes of history that while we study people, we are often so immersed in our books that we forget to talk to the ones who are still alive. History is, quite simply, a study of being alive. And I'm passionate about it because I believe it connects us more deeply to our own humanity.
In studying history we grapple with the questions and passions that have followed humanity since it all began. Especially so in the 15th and 16th centuries. The parallels to our own world - new technologies making information dissemination possible, societal changes happening at breakneck speed, England's sovereignty compared with a central European authority, a religious refugee crisis - are unmistakable. The people who lived in Tudor England dealt with a lot of the same issues we do.
So, given that I love people so much, it's amusing that I sometimes go days without talking to any.
And so, the idea for the Tudor Summit hit me earlier this summer. Bring together leading names in Tudor scholarship. Have them give talks. Get everyone connected in a group online. And everyone gets to learn and share together. Without the awkwardness of having to, you know, leave the house. I've seen gatherings like this in other areas.
In my previous life as the Assistant Director for California's largest library consortium I created an online conference called The Edgy Librarian. I've attended online conferences on self publishing. But I haven't seen one on Tudor England. And so, I created that which I wanted to attend.
The fun is this coming Sunday and Monday, the 3rd and 4th (it's a 3 day weekend in the US, hooray!) starting at 4pm in the UK with five talks each day. It all kicks off on Sunday at 4 UK time when Sarah Gristwood gives a keynote talk about Queenship in 16th century Europe. She's followed by Tony Riches talking about the earliest Tudors. Nathen Amin from the Henry Tudor Society passionately debunks some Henry Tudor myths. Melita Thomas from Tudor Times talks about Mary I, and James Boulton from the Queens of England Podcast walks us through the quick recap of the Six Wives.
Monday the 5th, Natalie Grueninger from On the Tudor Trail takes us on a tour of Tudor London. I follow with a talk on Tudor church music, and Rebecca Larson from Tudors Dynasty talks about Royal Scandals. Then Gina Clark, a Tudor costumier talks about Tudor fashion, and Roland Hui, an art historian caps it off with a talk on Tudor portraits.
The registration is completely free, and even if you can't attend live, register anyway - I'll be leaving the talks up for at least two weeks afterwards.
For the speakers, it's a chance for us to get our work out in front of audiences who may not already know us. For the attendees, it's a chance to learn and share your passions with others. There have already been some great connections in the accompanying Facebook group, which I love seeing.
Learn more, and sign up free at http://www.TudorSummit.com. See you in the Facebook group, and online on Sunday!
Heather Teysko
# # # 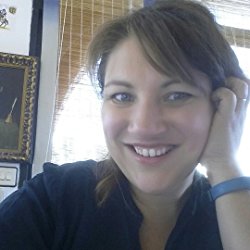 About the Author
Heather Teysko is the creator of the Renaissance English History Podcast, the longest continuously running independent history podcast. She's also an author, and the creator of the Tudor Planner, a weekly diary filled with history, quotes, and music. Her gateway to Tudor history was through choral music, and she is passionate about William Byrd. She lives in Spain with her husband and 4 year old daughter where she writes, podcasts, and, in her spare time, butchers Pinterest crafts. You can learn more about the podcast at http://www.Englandcast.com  and find Heather on Twitter @teysko.
Original link