Often it’s all a matter of timing. I read Douglas Preston and Lincoln Child’s Relic when it came out in 1995, having read some good reviews. I was in the Air Farce at the time, and that probably did not help me enjoy the book, that I read during one dull weekend while holed up in the switchboard bunker, plus a late-night train ride home. That, and the comparison to The X-Files – a series I did not enjoy very much – did not help putting me in the best disposition. I liked the set up, the setting and the premises, but I found the main protagonist Agent Pendergast absolutely insufferable. I came out of the book with very mixed feelings. 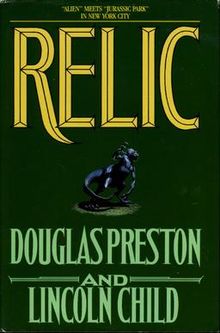 Also, it was pretty obvious one of the authors, that had been an employee of the museum in which the novel is set, had an ax to grind with that sort of environment, and while I can appreciate it – I do have my own set of axes to grind with the world of academia and research – and I certainly approve of using fiction to kill the people we hate, the revenge fantasy element in the novel was to me a little too evident.

So, OK, I sort of liked it but I wasn’t crazy about it – to the point that I have a stack of other Preston/Child books here in my emergency box, and I’ve never been desperate enough to try another – despite the excellent reviews the books had from people I respect.

And talking about people I respect, when the movie of the novel came out, in 1997, called The Relic, it had all the right people in it for me to like it – it was directed by Peter Hyams (that had done Outlands, which I had liked a lot), it featured Penelope Ann Miller, a youthful crush of mine, Tom Sizemore, a criminally underrated actor that rarely had the opportunity to be the lead in a film, and Linda Hunt, always a plus. And James Whitmore! I really liked him.
I think I missed the movie when it was in the cinemas because at the time I was working odd hours, and also because I still had a not-so-great memory of the book. I caught it later, on the TV on one of those late night summer horror movie marathons. It was too dark (meaning, the screen was mostly black), it was cut and it was riddled with commercial breaks. It did not make a lasting impression.

As I said, bad timing.

Later still I heard that the too dark photography was caused by a bad transfer when the movie had been made into a DVD. That, plus the fact that Peter Hyams had been both director and director of photography on this one, convinced me to check out the blue ray remastered version. That, and Penelope Ann Miller. So sue me.

The movie is quite good – so good, in fact, that I’d probably put it in my top three list of favorite monster movies of the 90s.

But let’s start at the beginning – the plot: a monster haunts the halls of the Chicago Museum of Natural History. It eats people. Well, actually it rips their heads off and eats a chunk of their brains. As a night gala brings a selection of choice victims to the museum, a cop and an evolutionary biologist join forces to solve the mystery.

The Relic is a monster movie, nothing particularly subtle about it – but it’s an intelligent monster movie, and it gets a number of things right. This is what’s important to me, together with the overall quality of the production. Let me see…

It’s got scientists that act like scientists – which does not only mean they backstab each other for funds, but that when the leading lady is attacked by a freaking giant bug, she squashes it with a big book, but then studies it. I know, it’s a small thing, but I really like it. The picture also gets the basics of the science right (exactly like the novel did) – making this a science fiction/horror movie.

Also, the movie knows that museums can be really scary places – indeed, museums can be among the creepiest places in a modern city, and provide tons of opportunities for horror. That The Relic takes some time to show the behind-the-scenes of a natural sciences museum is also a plus for me.

The Relic knows that showing the monster spoils the horror, and indeed it is very careful to give us only brief glimpses of the creature. According to online resources, the creature (that was part CGI and part practical effects) is on screen for no more than 5 of the 109 minutes of the flick. And this, together with the way in which the director uses light and shadows (but you need a good copy to appreciate that) is really a good thing.

The adaptation does without the insufferable Agent Pedergast, collapsing his character into that of the police detective portrayed by Tom Sizemore – and this basically killed the franchise, because the follow-up novels are all about agent Pendergast. So yes, this could be a sort of offbeat Raiders of the Lost Franchise post – a lot of publicity name-checked Jurassic Park (after all, DNA is mentioned and there’s a monster), and there’s little doubt the movie was made thanks to the success of the Spielberg/Crichton blockbuster. You can see that in the trailer too – that also thrown in a lot of Alien.

But don’t be fooled or pushed back like I was – this is, all in all, a nice little monster movie, smart and beautifully filmed, with a lot of good stuff in it. It almost makes me want to give Preston & Child’s series a second chance.