I’ve just left a conversation in which the works of Robert E. Howard, and his Conan stories in particular were described as rough and cheap.
Now, I beg to differ.
Granted, at his worst Howard was basically a competent storyteller, compensating with darkness and pathos his lack of a good story. But at his best, Howard’s Conan was not cheap, and was not rough. 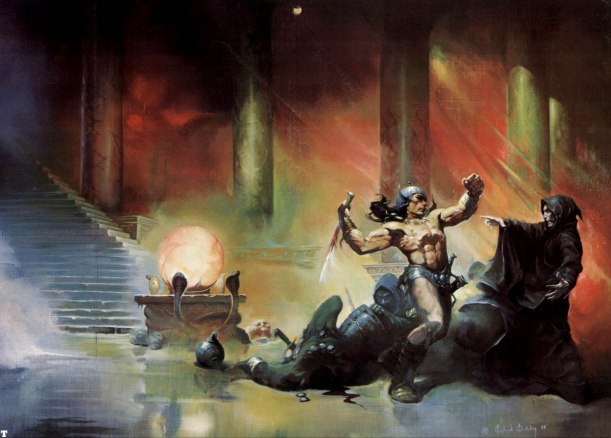 Being notoriously incapable of letting a matter rest when it peeves me, I’ll summarize my points here.

case can be made for a number of stories in the Conan series that show a high level of literary quality, of writing skill and of narrative prowess. My favorites are… 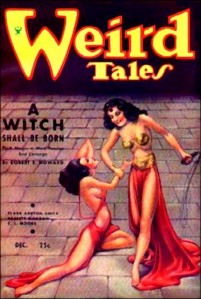 A Witch Shall Be Born is a wonderful example of how a story can be condensed to meet the required word-count without loosing depth and scope. There are a few narrative tricks, in this story, that testify to Howard’s sophistication as a writer. Also, it features the single scene most Conan fans will remember, with Conan hanging on a cross, the crushed neck of a vulture between his teeth.

Beyond the Black River is a grim, dark1 story lacking what many adolescent readers seem to consider the mainstays of Conan’s narratives: butchering and wenching. With its obvious debt to Fennimore Cooper, Black River has a great sense of place, and reads as the summation of Howard’s thoughts about civilization and barbarism. 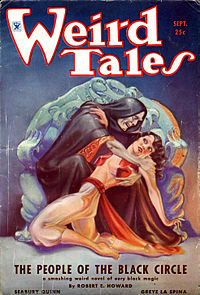 People of the Black Circle is a colorful, exotic tale, almost an Oriental Fantasy, and features a pitch-perfect take on the negative hero, Khemsa, a character that actualky steals the story from Conan, turning the Cimmerian into a tool of his own revenge. Howard’s writing is perfectly suited to the story, and it is not what I’d call cheap.

Tower of the Elephant once again gets the “brawling and wenches” out of the way and presents us with a truly tragic figure, and a vision of cosmic wonders tinged with elements mutuated from Lovecraft. Once again, Howard’s writing is top notch. 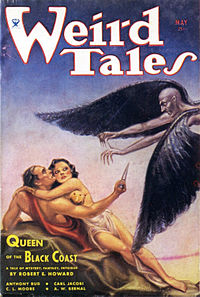 Queen of the Black Coast subverts the wenching bit, and casts Conan into a tragic story of passion and revenge. Indeed, with its tragic finale, Queen turns upside down the cliché that sees fantasy as cheap entertainment for adolescents of all ages, eager only to escape their set statistical future (school, work, marriage, two children and one third, and three quarters of a dog).
In this sense, Queen of the Black Coast is a warning about the hidden dangers of romanticism on a par with that other noir jewel, Fritz Leiber’s Ill Met in Lankhmar.

So, please, no. Not cheap, and not rough. 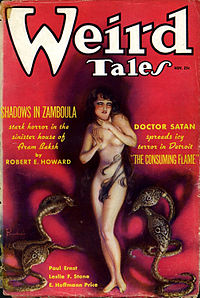 Were there some below par stories? Of course – Shadows in Zamboula is a fun story but little more, The Slithering Shadow is a fun game of cat and mouse with the required flagellation scene…
The least that can happen is for a few duds to be included in the catalog.

The Conan stories are not just ale and wenches, and they are not just repetitions of the same tired clichés. A certain sophistication is there, and skills much more refined than we should expect from a self-taught writer sitting in a backwater hellhole in Texas.

Then, of course, you can keep to the surface, and get only the swordplay, the curses and the half-naked beauties.
I am finding the growing teenage attitude to fantasy somewhat tiring, especially when it’s presented as critical assessment.
As I find tiring that any reply to certain absolute statements – like “Conan stories are all the same plot-wise, and there’s no surprises in them” – is rejected as a deluded, acritical fanboy rant.

“Conan is cheap drivel.”
“No, it is not.”
“You are a fan and are too attached to the object of your passion to recognize its limits.”

Which is also an excellent way to avoid discussing those same limits, of course.
The end result: personal opinions are offered as facts, and a bad service is given to both the author, the stories and the readers.
I’m basically getting too old for this rubbish.