Of the many elements that come together in a great novel, we count on the characters to drive the story, to elicit emotions inspiring pity, fear, empathy, and above all love.

In Safekeeping, author Hope delivers. This is not your typical, building a kibbutz story. Rather it is a coming together of a diverse lot of people during the dying days of kibbutz life.

Nothing will be the same as Ziva remembers from her days of founding the kibbutz. Nor will everyone find what they are seeking, but then, isn’t that “real” life? Despite the lack of a “happily ever after ending,” the tale comes to its proper conclusion and there is satisfaction in that. 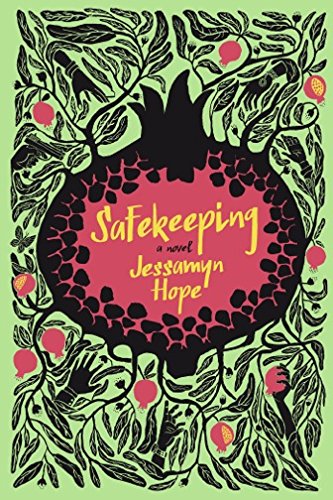 It’s 1994 and Adam, a drug addict from New York City, arrives at a kibbutz in Israel with a medieval sapphire brooch. To redress a past crime, he must give the priceless heirloom to a woman his grandfather loved when he was a Holocaust refugee on the kibbutz fifty years earlier. But first, he has to track this mystery woman down—a task that proves more complicated than expected.

On the kibbutz Adam joins other lost souls: Ulya, the ambitious and beautiful Soviet émigrée; Farid, the lovelorn Palestinian farmhand; Claudette, the French Canadian Catholic with OCD; Ofir, the Israeli teenager wounded in a bus bombing; and Ziva, the old Socialist Zionist firebrand who founded the kibbutz. Driven together by love, hostility, hope, and fear, their fates become forever entangled as they each get one last shot at redemption.

In the middle of that fateful summer glows the magnificent brooch with its perilous history spanning three continents and seven centuries. With insight and beauty, Safekeeping tackles that most human of questions: How can we expect to find meaning and happiness when we know that nothing lasts?