She had lots of great memories from spending summers here

Romance
Uvi Poznansky
The Dragonfly Pointe Inn rose majestically above the lake, amidst a backdrop of towering pines. Now, with its columns and crisp white siding, it looked stately—magnificent, really.
Turning her attention back on the road, Beth managed to jerk the wheel of the SUV just in time. She’d come only inches away from running down a floppy-eared dog, as he wandered down the edge of the road. “Damn,” she muttered under her breath. He looked to be a Bassett hound—well, partly, anyway. As he scrambled over the blacktop, his leash was held onto by a jogger, who was running beside the dog on the gravel.
When she began to slow down, the man lifted his hand in acknowledgement, while continuing to keep pace with the dog.
Relieved, Beth blew out a long, deep breath as she kept on driving. Hopefully, she was going in the right direction? Yeah, she was, she discovered, because soon she was pulling the SUV off the road and into the parking lot of the deserted Dragonfly Pointe Beach.
She’d always loved this place—Beth had lots of great memories from spending summers here with her cousins. And despite the fact that she’d never actually lived here, the town of Crystal Rock had been the only place in her entire life that’d ever felt like home.
She turned to Kyle—who was looking hopeful, with his endearing smile and big blue eyes. Now, he was twenty-years old, but he’d always been a handful—especially once he’d outgrown her by several inches. He’d had some behavior problems associated with puberty. But Beth considered herself fortunate compared to some of the other parents she’d met. Many of Kyle’s classmates had much more severe problems than he’d had. Kyle’s temper had always been relatively manageable—even though she’d eventually broken down, and put him on medication during his teenage years, for the sake of his teachers and caregivers.
Ah, what the heck? It was a crisp cool day, and a little fresh air would be good for them both after the long drive. Why not just go for a short walk along the beach?
She bundled herself up into her winter coat, and slipped her earmuffs over her ears.  Hopping out from the van, she slid open the passenger door behind her. “Put your coat back on, sweetie,” she said.
Excerpt from Two Hearts Unspoken by Tamara Ferguson
Included in Love in Times of War 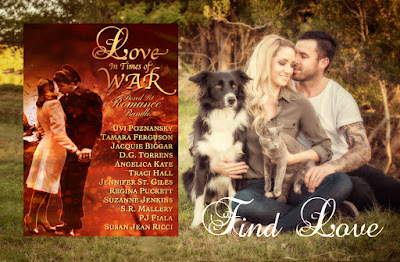 Love Romance? Get this amazing collection
Love in Times of War
Kindle ★ Nook ★ Apple ★ Kobo  ★ Smashwords
"This anthology consists of twelve wonderful stories with the inherent theme of love and war contained in them. Out of the twelve authors, Uvi Poznansky is the only one that I was familiar with previously. So, in addition to becoming acquainted with new authors in this set, my 'to be read' pile has grown considerably. That is not a bad thing with the wind chill of a minus 10 as I write this review!!"
-Off Grid...And Loving It... TOP 500 REVIEWER
Original link