Sister Witch, His Father's Blood, and My Name is Samantha

Good morning and welcome to Sharing Saturday. This month, we’re focusing on paranormal books. There will be a lot of visitors making an appearance but on Sundays and Tuesdays, this blog will be all about things that go bump in the night!
Ghosts, ghouls, demons, you name it and I find it fascinating. Anything that can’t be proven becomes a story in my head, a way to explain those mysterious bumps in the night or things moving when no one is near them. Oh, I’ve heard all the explanations about how it could be cars driving past or a minor earthquake—good luck proving the second one to me. I can feel earthquakes, having grown up in an area where they abound.
Welcome David W. Thompson to the blog today. He’s here, talking about his books, Sister Witch, His Father’s Blood, and My Name is Samantha. 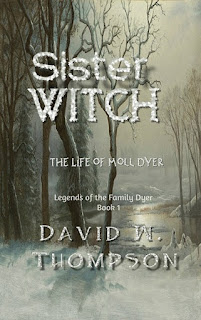 Get the eBook on Amazon
Get the print book on Amazon
Blurb
Moll Dyer wants to leave her troubles behind when she immigrates to the New World... but even an ocean cannot keep the Dyer family curse from following her! Wanting only to find peace, she fights injustice in a new land founded on tolerance, but ruled by bigotry. In 1697, the ancient enemy returns, and Moll takes a stand! 300 years later, is the world finally ready for Moll's story?
Life in the British colonies is tough on man and woman. Hunger, disease, Indian attacks, and drought test the resolve of the settlers daily. But troubles for the Dyers include another threat. In this land of religious fervor, devastating sickness, and persistent greed, can Moll turn back the evil alliance formed against her and her bloodline? Or will hell's bloody wrath extinguish her dream of a new life in the New World? How far will she go to protect her family and their world?
Faith despite Betrayal. Courage in the face of Injustice. The triumph of love.
The legend of Moll Dyer originated in earliest colonial Maryland. Despite 300 years of civilization, and the advent of scientific reason, Moll's name is still often heard there, especially around campfires late at night, or as a warning to misbehaving little people. Her spirit is often seen as a wisp of unnatural fog in the swampy woodlands near her homestead, with her half-wolf companion at her side. 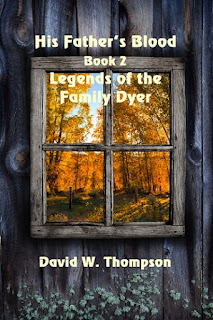 Get the eBook on Amazon
Get the print book on Amazon
Blurb
The demonic force that’s cursed the Dyer family for generations has returned even stronger! Defeated by Moll Dyer a century earlier, the demon Laris lays claim to another Dyer child.

Homesteading on Devil’s Peak, skin-walking shaman John Dyer must fight to save his bloodline. Can the Dyers stand against the horrific desires of a centuries old demon? Can their faith in each other overcome the evil pitted against them?
This historically accurate epic follows John- scion of the Dyer family, and the great-great grandson of the venerable Moll Dyer-- in his quest for a new life, and a place to settle down and call home. The fates conspire against the Dyers, and only their sorely tested faith in each other can overcome the evil set in place against them. 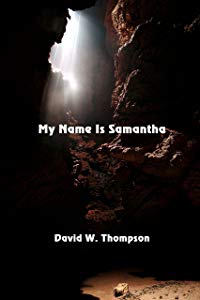 Get the eBook on Amazon
Blurb
Her husband's infidelity sends Samantha's life in a tailspin. Her life in turmoil, she sets out on a camping and caving adventure to rediscover herself. When a handsome stranger shares his campfire, she admits her attraction to him--but only to herself. She wants no part of a rebound relationship, or another man! Samantha learns that support and family can come from strange places.
About David W. Thompson
David W. Thompson is an award winning author, a native of Southern Maryland, and a graduate of University of Maryland, University College. David's love of the written word began early in life. He claims his first writing effort was "Dick and Jane" fan fiction when he was six years old- no doubt with a dark twist!

After his family and cheesecake, reading was his first love. It exposed him to people, cultures and ideas he'd never experience otherwise. Writing was a natural extension of this "out of body" experience as characters carved little niches in his mind- showing their worlds, and their possibilities. He hopes to honestly convey the stories that they whisper in his ears.
When he isn't writing, Dave enjoys time with his family and grandchildren, kayaking (mostly flat water please), fishing, hiking, hunting, wine-making, and pursuing his other "creative passion"- woodcarving.