So, will you tell me about the murder?

Wearing a midnight-blue avant-garde sequin cocktail dress with a plunging v-neckline and no jewelry except for pearl stud earrings, she looked stunning. Her lips glistened into a smile when he touched his nose to hers, coming into a kiss, almost.
Ash took in the trace of Dior Sauvage aftershave on his chin, and her eyes closed as she gave a little moan. Then she pulled back, took a silk apron off a hook, and joined him in preparation of the meal, as if no time had passed since their last date, way back when.
“I missed you,” he said.
Ash answered by letting him bite into a strawberry she was nibbling on. Having washed some blueberries, she added them to the mix along with a cup of sugar. “Your pepper mill is nearly empty.”
“Let me fill it for you,” said Michael. And lowering his voice, he added, “Sweetheart.”
She gave a little giggle, so he figured he need not be too cautious in using terms of endearment.
Peppercorns danced their way with a pinging sound into the mill. Michael dialed it to the exact grind he wanted. Then he sprinkled freshly ground pepper into the bowl, and for good measure, added a dash of hot pepper sauce and a squeeze of lemon juice.
Ash toasted some slivered almonds, to be stirred into the concoction just before serving on top of the poultry dish. The aroma tingled his nostrils. It was wonderfully enticing.
Next, she took the chicken out of the refrigerator and stuffed its cavity with a bunch of fresh thyme, both halves of a lemon, and a head of garlic, cut crosswise.
“Is that a new dress?” he asked.
In place of a reply, she blushed.
“Looks beautiful on you.”
She turned to the sink and splashed some cold water on her face, to make the blush go away, but it didn’t. “So, will you tell me about the murder?”
“I’ll do better than that. I’m going to show you.”
“Really?”
“Virtually.”
“I’m dying to see!”
“I’m dying to see it myself, sweetheart. Later.”
With impatient strokes, Ash brushed the outside of the chicken with melted butter and sprinkled it with salt and freshly ground pepper. Then she tied the legs together with kitchen string and tucked the wing tips under the body of the chicken.
“Oh,” she said. “You’re such a tease!”
“And so are you,” he said.
Excerpt from Virtually Lace 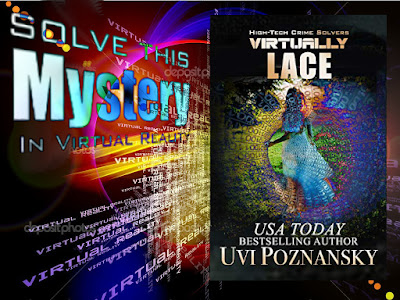 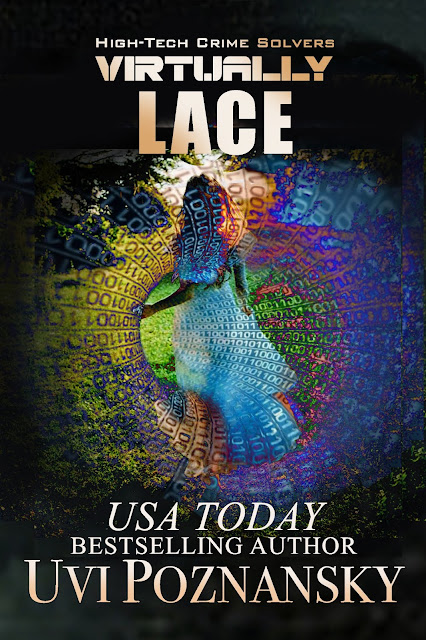 Astonishingly well written, Uvi once again surprises us with the depth of her talent. This is one fine series to follow. Highly recommended.
~Grady Harp, HALL OF FAME, TOP 100 REVIEWER
Original link