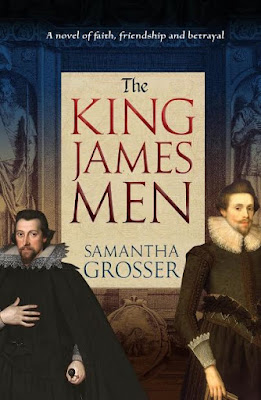 New on Amazon UK and Amazon US
England 1604: Faith, treason, love, betrayal
Two men, once friends, have long since gone their separate ways. But when the new King James commands a fresh translation of the Bible, their paths are fated to cross again.
Today I'm pleased to welcome historical novelist Samantha Grosser to The Writing Desk

Tell us about your latest book

Connected by love, divided by faith. The King James Men is novel of friendship, faith and betrayal during the religious upheavals of 17th Century London. In the turbulent years of the early 17th Century, King James commands a new translation of Bible. For scholar Richard Clarke, the chance to be involved seems like a gift from God, until he discovers there is a price to be paid, and that price is betrayal. Caught between love for a friend and his faith in his Church, he must soon make a choice that could cost him his soul.

Set against the writing of the King James Bible, and inspired by true accounts of the people who became the Mayflower Pilgrims, The King James Men is a vivid portrayal of the religious struggles of the age and the price of being true to your faith.

In an ideal world, I’d get up early and go for a walk somewhere beautiful and inspiring, before returning to my desk for a morning’s writing. I’m usually pretty spent creatively by lunchtime, so I like to spend the afternoon attending to the business aspects of life as an author.

What advice do you have for aspiring writers?

Read, read, read. Write, write, write. Do it because you love it, even when its hard. And learn to take criticism on the chin – it’s something you’re going to have to get used to.

I’m still working this one out! Blog tours, obviously. Ads on Amazon. Goodreads. And spreading the word via social media.

Tell us something unexpected you discovered during your research.

Gosh, where to begin? I started off with an idea to write about the translation of the King James Bible. But the challenge was to create a compelling novel within that story, and in the mountains of research I collected about the period, by chance I came across the story of the Separatists, a small community of nonconformists who would later go on to become the Mayflower Pilgrims. The story of The King James Men was born in the conflict between the world of the translation and the world of the Separatists.

The hardest scenes by far were those that involved the moments of bible translation. With zero understanding of biblical Hebrew, it was hard to know where to start. Fortunately I have a very learned friend (thank you, Dr Louise Pryke) who was able to help with the technical aspects of the language. But it was still a challenge to write these scenes in a way that not only added depth to the novel, but was interesting to read.

Currently, I’m working on another novel set in England in the 17th Century in the lead up to the English Civil War. I’m still rattling out the first draft, and so I don’t want to jinx it by saying too much!

Samantha Grosser
# # #
About the Author 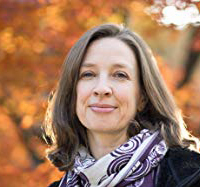 Samantha Grosser is an English graduate and author of historical fiction who spent several years travelling and working as an English teacher in South East Asia, Japan and Australia. She has also worked variously as a bookseller, a secretary, a proofreader and a Registered Nurse. She currently lives on Sydney's Northern Beaches with her Australian husband and son. Find out more at Samantha's website https://samgrosserbooks.com/ and find her on Facebook and Twitter @SamanthaGrosser
Original link