Special Guest Post: Headdresses of Noble Women During the Reign of Henry VIII, by Sarah Bryson 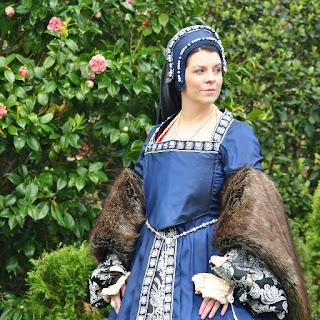 Clothing was very important in the Tudor age, people dressed according to their status and there were laws which dictated what people could and could not wear. The higher in status a person was the more luxurious their clothing could be. For example only the Royal family could wear crimson, this defined them as royalty, while lower class people simply could not afford such rich fabrics for clothing, not to mention it would not be practical to wear such delicate garments while doing physical labour.
In addition to this, during the reign of Henry VIII married women had to cover most of their hair. Headdresses including the Gable Hood and French Hood were the two main headdresses worn by women of the court. Just as the gowns they wore, a woman’s headdress was a statement of their status and wealth. Women of the Tudor court would wear lavishly decorated headdresses and many would try to copy and emulate what the Queen wore. In this article I will be discussing two types of Tudor headwear, the Gable Hood and French Hood. But first I must talk about the Tudor Coif….
Coif
Women were supposed to have their hair covered. There were some exceptions, girls could wear their hair down and the Queen of England could wear her hair down on her coronation day – but other than this a married lady had to wear her hair up and covered. The coif one of the most common pieces of headwear worn by all classes of women during the Tudor age. Coifs were usually made of linen, any cheap material, or even silk for a richer woman, and they were either white or light in colour.
The coif was essentially a cap that was worn to cover the head and to hide most of a woman’s hair. For the common woman, those that worked upon the land, spun for a living or other types of physical labour, the coif was a way to keep the hair back from the face. For women of nobility and the Tudor court the coif was worn under the hood to hold back a woman’s hair from the face and to protect the hood from the hair’s natural oils. The coif could be simple in design and appearance or beautifully embroidered with fine thread. A woman’s hair was commonly braided and tied up under the coif.
Women at court, ladies in waiting and the Queen, would have worn a coif that would most likely have been made of silk or another type of expensive material and it would have been intricately embroidered. Despite not being able to be seen, the coif was still a fashion piece and more so a statement of a woman’s position. The prettier and more expensive the better!
Gable Hood
There were two types of hoods, the English hood otherwise known as the Gable and the French Hood. The Gable Hood was most popular during the later years of Henry VII’s reign and the first decade or so of Henry VIII’s reign. The Gable covered all of a woman’s hair and was often made in a triangle shape with the point at the top. Thanks to painters during this time, such as Hans Holbein, we have many wonderful examples of the Gable Hood.
Like any fashion, the style of the Gable Hood changed over time. The lappets (white parts that hang down to the shoulders) shortened over the years, and changed in length depending on the desire of the wearer. The hood (the material that hangs down the back) also changed quite dramatically over the reign of Henry VIII and we have several examples were the hood hung completely down the back, one of these being in a portrait of Queen Katherine of Aragon, Henry VIII’s first wife.
·
There are also examples in paintings that show half of the hood pinned up. An example of this can be seen in Queen Jane Seymour’s portrait. The right half of the hood was turned up and folded or twisted and then pinned so it would project on the left side. The left side of the hood was then brought across the back and draped over the right shoulder. This style of Gable Hood was also referred to as the ‘whelk shell headdress’ as the hood was sometimes folded in the shape of a whelk shell.
Another example of how the hood was designed and worn has a square shape at the back of the Gable hood, and the hood is split into two parts or panels that hang down loosely and could have been worn over each shoulder. There is a wonderful Holbein sketch that shows this split hood.

The Gable Hood was also decorated with lavish jewels depending on the wealth of the wearer. It was made out of expensive materials and designed in a variety of colours to suit various coloured gowns the Queen or noble woman was wearing. As with fashion of the day the decoration of the hood changed according to the person’s style, their wealth, and how much they wanted to display their status.
The Gable Hood was quite popular during the later years of Henry VII’s reign and the early years of Henry VIII’s reign however, it did not completely disappear from usage until around 1570.
French Hood
It is commonly believed that Anne Boleyn brought the French Hood to the Tudor court when she returned from France and made her debut at court in 1522. However this is not the case, it was most likely that Mary Tudor, younger sister of Henry VIII, whom had the greatest influence upon the introduction of the French Hood as a fashion statement at court, especially upon her return to England after her short lived marriage to King Louis XII of France.
The French hood was far more scandalous than the Gable Hood as it was worn back from the hairline and showed some of the woman’s hair. It was also designed in a circle or oval shape.  The hood may have been tied under the chin by a thin piece of ribbon or may have been fitted to the head and pinned to the coif or hair.
At the front of the French hood was a coloured piece of material, sometimes frilled or for royalty made of gold gauze. This rested upon the hair and toward the back of the hood was a fixed wire which was covered with material and often lined with expensive jewels. This wire provided the oval shape of the hood. A black or dark colour tubing of material was attached to the back of the hood and hanged down the woman’s back.
The style and decoration of the French Hood changed over the years depending on the fashion of the time and person wearing it. Sometimes the back of the hood was raised higher and more intricately decorated, while other styles pushed the front of the hood back to reveal more hair. As in modern times the overall design, shape and decoration of the hood changed with personal taste and courtly fashion.
As mentioned, for women of the court of Henry VIII the headdress they wore reflected their status and wealth. Thanks to talented painters of the age such as Hans Holbein and Lucus Horenbout, we have many wonderful examples of women wearing both Gable and French hoods.

Sarah Bryson
# # #
About the Author 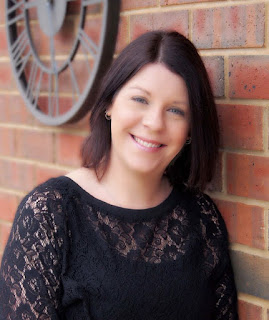 Sarah Bryson is a researcher, writer and educator who has a Bachelor of Early Childhood Education with Honours. She currently works with children with disabilities. She is passionate about Tudor history and has a deep interest in Mary Boleyn, Charles Brandon, the reign of Henry VIII and the people of his court. She is the author of Mary Boleyn in a Nutshell and Charles Brandon: The King’s Man. Visiting England in 2009 furthered her passion. Sarah lives in Australia, enjoys reading, writing and Tudor costume enactment, and wishes to return to England one day. Find out more at Sarah's website sarah-bryson.com and follow her on Twitter @SarahBryson44.
Original link