Special Guest Post ~ The Evolution of an Historical Fiction Trilogy, by Millie Thom 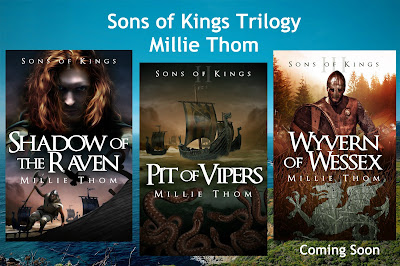 Available on Amazon UK and Amazon US
Thank you for the invitation to guest post on The Writing Desk, Tony. I am delighted to accept. Sons of Kings is an historical fiction trilogy set in the Anglo Saxon and Danish lands during the second half of the 9th century. The first two books are available on Amazon and I hope to have Book 3, Wyvern of Wessex, published by late May 2018.

The three books follow the lives and exploits of historical figure, Alfred of Wessex, and the fictional Eadwulf of Mercia. The trilogy title stems from the fact that both characters are the sons of kings: Alfred the fifth son of the historical King Aethelwulf of Wessex, and Eadwulf the fictional son of the historical Mercian king, Beorhtwulf. Their stories run concurrently, and I was careful to fit Eadwulf's story into the chronology of Alfred's.

I first became interested in King Alfred when I lived and taught in Wantage in the 1970s. Wantage was, reputedly, where Alfred was born. Today, in the market place of the small Oxfordshire town, stands one of the two most famous statues of the Wessex king. The other is in Winchester, which became Alfred's capital.

The story of Alfred's long fight against the invading Danes (Vikings) intrigued me even before I moved to the town, and in Wantage I learnt so much more about him. Unfortunately, juggling the raising of six children with a teaching career meant that my story was left 'on hold' for many years before I could actually set to and write it down.

Although my second protagonist if fictional, Eadwulf's story is not too far-fetched to believe. The Anglo Saxon Chronicle tells us that King Beorhtwulf was 'put to flight' when Danes sailed up the Thames in 851 and ravaged the London region. Further research told me that Beorhtwulf possibly had two sons, although I found no reference to them elsewhere. Not that I looked too far. That little snippet was enough to spark my imagination… and Eadwulf was created as Beorhtwulf's eldest son.

The three books follow Alfred and Eadwulf through their trials and tribulations, their times of sorrow and joy, their responsibilities and duties, and vows made to avenge past wrongs. Eadwulf's story of his life as a Danish thrall (slave) forms the main focus of Book 1, Shadow of the Raven. Alfred was a child of two at the start of the trilogy, so much of his early story revolves around events in Wessex under the rule of his father, King Aethelwulf, and other family members. Alfred's early life is not easy as he suffers the loss of people he loves.

Book 2, Pit of Vipers, brings Alfred's route to kingship to the fore. The invasion of the Anglo Saxon kingdoms by the Norse 'Great Army' in 865, is relentless as more and more Danes arrive each year. One kingdom after another succumbs to Danish control and when Alfred comes to the throne in 871, he vows to keep Wessex safe from the hands of the pagan Norse. Meanwhile, Eadwulf continues his incessant quest for revenge on those who betrayed his family.

Alfred's desperate battle to save his kingdom is the main theme of Book 3 as he comes face-to-face with the new Danish warlord who appears to be more than his match. And Eadwulf eventually finds a purpose to his life.

Initially, I set out to write a single novel about the life of King Alfred and the invading Danes. When I decided to add the second protagonist, Eadwulf, I soon realised I had far too much material for a single book - and the trilogy was born. Nor did I intend to write my story as straight historical fiction. Shadow of the Raven and the first half of Pit of Vipers, were originally written as historical fantasy - until I realised that the lives of Alfred and Eadwulf did not work too well as fantasy, and spent ages taking all the fantasy out!

So, the trilogy has been several years in the making. I've learnt much during that time and reinforced my love of historical fiction as a genre. But, although I appreciate the value of writing a series of books, my next novel will definitely be a one-off! 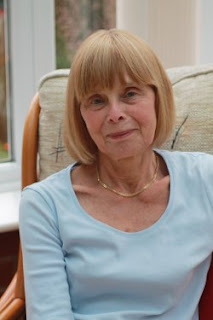 Millie Thom is a former geography and history teacher with a degree in geology and a passion for the Anglo Saxon period. Now that their six children have all 'flown the nest' and Millie has retired from teaching, she and her husband live in a small village in Nottinghamshire, midway between the town of Newark and the lovely old city of Lincoln. Here, Millie spends her time writing and enjoying long walks in the countryside. Millie is the author of the first two books of the Sons of Kings trilogy, set in the mid-ninth century, and is currently writing the third, which she hopes to publish by late spring 2018. Millie has also published, A Dash of Flash, a book of very short stories and flash fiction pieces. Find out more on Millie's website
https://milliethom.com/ and follow her on Twitter @MillieThom