I’m happy to welcome award-winning author Catherine Castle. Today, Catherine shares her writing journey and latest releases, Bidding on the Bouquet and Trying Out for Love. 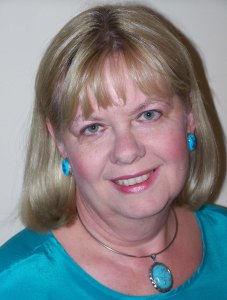 Books have always been in my blood. One of my earliest memories is of reading a Little Golden Book—the story of Cinderella. Somewhere in the archives of my parents’ photographs there is a picture of me, holding the book upside down, as I pretend to read the story. When I actually learned to read, a trip to the library yielded not one book to come home with me, but an armload that was nearly bigger than myself.

The transition from reading to writing was a natural one—a hobby (or dare I say skill?) that was encouraged by my mother who praised everything I wrote. Some of my early endeavors included horror short stories entitled Witch Mountain and Bloody Buttons, a sci-fi story about aliens (I can’t remember the name of this particular piece), which I illustrated myself. And I can’t forget the loads of awful poetry I penned as a heartsick teen. I’ve since improved greatly on the poetry scale.

My first romance, written as a teenage girl, was about me and the television star crush of my life—Johnny Crawford, of The Rifleman television series fame. Naturally, it had a HEA, and a floorplan of the mansion where we lived HEA in Hollywood, California. I like to think my romance novels have greatly improved as well.

Then I met the real true love of my life. Somewhere along the way from our high school sweetheart stage to married couple, we discovered we made not on a great couple, but great writing partners and we began to write plays for our church. Along the way to book publication I spent 10 years as a freelance writer for our weekly hometown newspaper, writing everything from news articles to fashion features. I also freelanced for a Christian publisher writing curriculum and articles for children’s Sunday School papers.

Today, my husband and I are still co-authoring, but I’m a solo author as well, penning sweet and inspirational romances. My debut novel, The Nun and the Narc, from Soul Mate Publishing was an ACFW Genesis Finalist, a 2014 EPIC finalist, and the winner of the 2014 Beverly Hills Book Award and the 2014 RONE Award, as well as placing in several other contests. This year’s releases are A Groom for Mama, a sweet romantic comedy from Soul Mate Publishing, and my December release, Bidding on the Bouquet, from Forget Me Not Romances, an inspirational contemporary romance.

Most recently, Bidding on the Bouquet has been included in the boxed set Trying Out For Love, from Forget Me Not Romances, along with books from five other authors. The sweet romances, with an inspirational element, found in this set were inspired by a bridezilla news article one of the authors read and passed on to a writing loop we all belong to. The story of the bridezilla, who made her bridesmaids bid at an auction for the “privilege” of being in her wedding, struck a creative chord in a number of the authors who read the article, who then took up the challenge to write a book using this story starter. And we all had some very interesting twists on the original story. 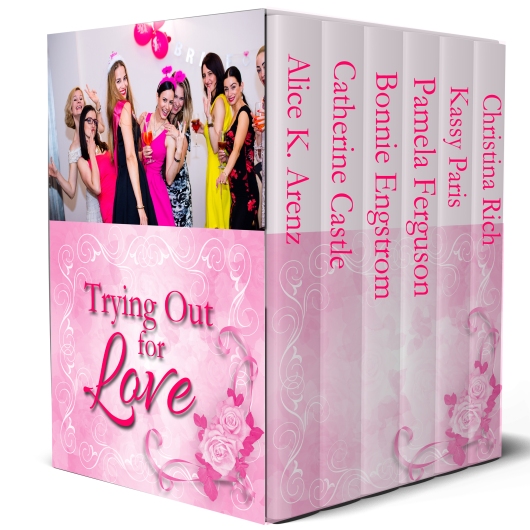 Trying Out For Love Blurb

Six women bid on weddings, either as bridesmaids, wedding planners, or photographers. What ensues is a delightful romp through unexpected romance for all involved. Would you audition for love?

Here’s a peek at my book Bidding on the Bouquet found as a single novel and in the boxed set Trying Out For Love. 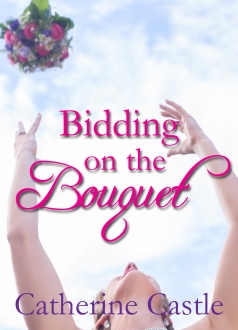 “An invitation to bid on a bridesmaid spot in Chrissy Vandermere’s wedding.”

Tinsy stopped mid-dip in the spaghetti. The pasta rolled over the edge of the plate into the steam table container. “The Chrissy Vandermere?”

“Know of her. Her father owns half the buildings on Broadway.” Tinsy scooped the pasta onto the plate and passed it to Marietta. “Where have you been, girl? Hiding in a cave somewhere? Chrissy’s upcoming wedding is all over the news.”

“I don’t watch the news. I’m too busy studying. Besides, the awful stuff going on keeps me awake if I get those images in my head.”

“How do you know Chrissy?” Tinsy glanced out at the motley group of people eating dinner. “You two certainly don’t travel in the same social circles.”

“From school, I think. If the Chrissy I know is the same Chrissy who sent the invitation, I guess she remembered me from a study class we had together.”

“She comes from classy folks. Rich socialites. That’s a pretty big deal to get an invite.”

“You sound like those slick magazines that fawn over the rich and famous.” Marietta handed the last person in line his plate, then studied the woman beside her. Tinsy was a practical, down-to-earth, solid woman. God-fearing even. “I’d have never expected fan-girling from you.”

Tinsy shrugged. “We all got our dreams. You want a high-powered marketing job. Me, I like those fancy clothes the rich wear. I can’t afford more than a knock-off from the Double Discount Barn, but I’d sure like to dress in expensive outfits. Don’t hurt to dream.” She stared Marietta directly in the eyes. “So, what you gonna do with the invite?”

“I don’t have money to bid on a bridesmaid spot. Even if I did, and I won, I’d have to buy a dress, spend time doing stupid bridesmaid things when I should be studying, and probably be forced to cater to Chrissy’s every whim. She was a bit of a diva in school. Considering she thinks women are going to bid to be in her wedding, I doubt that’s changed much. It’s stupid.”

“It’s a chance of a lifetime,” Tinsy insisted. “How often do you think you’ll get the chance to hobnob with the likes of the Vandermeres?”

“If this is my Chrissy, I’ve hobnobbed with her already. I didn’t find it thrilling.”

From January 9 through February 19 the authors of the boxed set Trying Out For Love are each giving away one free ecopy of their novels that are included in the set. Additionally, one ecopy of the boxed set Trying Out For Love will also be offered as a giveaway on Catherine Castle’s blog during that time frame. To be entered to win, click on the Rafflecopter box in the Tuesday Wedding Tales blog series featuring any of the six authors and follow the instructions. Winners will be announced February 20.

Catherine Castle is a multi-award-winning author who loves writing, reading, traveling, singing, watching movies, and the theatre. In the winter she quilts and has a lot of UFOs (unfinished objects) in her sewing case. In the summer her favorite place is in her garden. She’s a passionate gardener who won a “Best Hillside Garden” award from the local gardening club.

Her debut inspiration romantic suspense, The Nun and the Narc, from Soul Mate Publishing was an ACFW Genesis Finalist, a 2014 EPIC finalist, and the winner of the 2014 Beverly Hills Book Award and the 2014 RONE Award. A Groom for Mama, is a sweet romantic comedy from Soul Mate Publishing. Her latest release, Bidding on the Bouquet, from Forget Me Not Romances, is an inspirational contemporary romance, and is included in the boxed set Trying Out For Love. Her books are available on Amazon.

Where to find Catherine…