The Amazon Queen and misplaced nostalgia 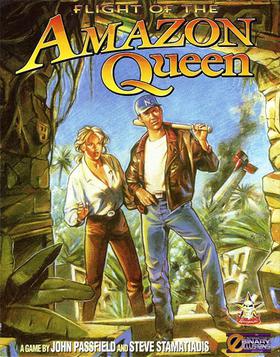 I think I got a handle on this whole nostalgia thing that’s going at the moment.
You see, a few nights ago I was going through one of my usual bouts of insomnia, and so I decided to waste my time playing Flight of the Amazon Queen.

In case you missed it, it’s an old point-and-click game that was released in 1995 for the Amiga and MS-DOS systems, and it’s been going around as a free game forever.
In the game you play Joe King, a bush pilot that in 1949 is chartered to fly a movie star to the Amazon jungle for a publicity shoot, but crash lands in the middle of nowhere instead.
Featuring a mad scientist called Frank Ironstein that plans to conquer the world with an army of dinosaur women, Flight of the Amazon Queen is a game in the same style of Indiana Jones and the Fate of Atlantis and The Secret of Monkey Island.
And I found it as boring as hell.
Which is a pity, because it’s pretty obvious a lot of work went into the game, and I do not have any doubt about the fact that I would have found it quite gripping in 1995.
Indeed, I found it fun and engaging, in 1995.
But that’s no longer me.

The same – fun things of the past that now I find boring or at least less satisfying – goes for game books, and old roleplaying systems, cheap ’80s flicks, third-grade fantasy knock-off series and synth-pop.
It was fun back then, but it’s no longer now.
There’s still a lot of those things that I love, but generally speaking I have to admit to myself that a lot of the catalog did not age so nicely.

But, some might say, why then do I waste your time telling you about old radio shows from the ‘40s, old pre-Code movies, pulp stories from 1930s magazines, and what else?
Shouldn’t I be looking at the future?
Fact is, those things are not part of my past – I did not experience them back in the day because I was not there, and I did not experience most of them as a kid.
They belong to my present – and while I love putting them into historical perspective and all that, they are still something that’s happening to me here and now.

And I think the same goes for a lot of the nostalgic, self-styled “nerds” out there – that keep waxing nostalgic about the D&D Red Box, about 8-bit PC games, about long-discontinued comic books and TV series… all things they were too young to experience first hand when they were kids, or that they avoided because they were uncool back then, and only became cool recently.
And I detect a little annoyance when I say “I saw that movie in a cinema” or “I played that game when I was in high school” but the meaning of these observation is not “I’m cooler” or even “I was cool before you were” – it’s basically an attempt at explaining that my enthusiasm was spent in the past, for those things, and they have (in most cases) lost part of their magic, or become routine, or even turned into the basis for a passion that’s still engaged, but no longer focused on those titles, those products, those specific instances.

Some seem not to get this.
It’s a sort of nostalgia for a time we did not know, and that we are experiencing now through revival and rediscovery. And the important thing, with nostalgia, is not to let it lull us in the illusion that the past was like we imagine it.