I mentioned the Angélique movies in my last post, as an obvious inspiration for my new Asteria story, and I said I’ll have to write something about them.
Here goes – after all, this is sort of Other People’s Pulp.

There was a time, through the 1980s and the early ‘90s, when the five movies based on the Angélique series of novels were regularly shown on the TV, usually in the afternoon, for housewives to watch while doing the chores.
Later the same time slot would be filled with mind-boggling talk shows and reality shows, but back then anyone at home in the afternoon would get two movies back to back – usually a Hollywood classic and some romantic potboiler.
Angélique was perfect for the purpose.

I normally consider the series to be the prototypical bodice-ripper. And while I am not sure this is globally correct, it is certain that they were the first novels of that kind published in my country, and it is also certain that a fair amount of bodices were dutifully ripped.
There was, in Italy, in the 1950s, a ready availability of romantic novels aimed at the female public. Stories about aristocratic young women falling in love with biplane pilots. The reference author was called Liala, and had been churning out that sort of stuff since the ‘30s.

But Liala’s novels were very chaste, the passion and the (oh, my goodness!) sex only implied. Angélique was quite another story. These were French novels, and were supposed to be incredibly racy. My mother had read a good number of books in the Angélique series of novels when she was a young woman studying to become a secretary, and we had a few volumes at home. I admit I never felt the curiosity of checking them out, mostly because of the movies, that as I said were often on the telly and I found insufferably boring and too heavy on the romance – you know, girls’ stuff.

What we are talking about: the daughter of an impoverished aristo in 17th century France, Angélique de Sancé de Monteloup, aka La Marquise del Anges (The Angels’ Marquess) is beautiful and virtuous and gets married off to an older man, a scarfaced Count that’s suspected of practicing alchemy and devil summoning, and that’s affectionately known as The Great Lame Devil of Languedoc (because it’s easy being liked). The two start on the wrong foot, but then grow actually quite fond of each other, especially since the Lame Devil treats her kindly instead of raping her.

And yes, this is where you might start to get a WTF vibe.
But hey, it’s French!

Anyway, they have just time to hit it off when he’s imprisoned by the King, and sentenced to death. From this point on, and to quote the highly tongue-in-cheeck entry on Wikipedia, Angélique…

descends into the underworld of Paris; emerges and through a turbulent second marriage gets admittance to the court at Versailles; loses her second husband in war, just as she had started to truly love him, and subsequently refuses to become the King’s mistress; finds that her first husband is after all alive but is hiding somewhere in the Mediterranean; sets out on a highly risky search, gets captured by pirates, sold into slavery in Crete, taken into the harem of the King of Morocco, stabs the King when he tries to have sex with her, and stages a daring escape along with a French slave who becomes her lover; gets back to France, only to be put under house arrest in her ancestral home and raped by rampaging royal soldiers, which arouses the province to a rebellion which is brutally put down

And we are more or less in the fifth of a thirteen book series, penned by Anne Golon with the help of her husband Serge (that was, believe it or not, a geochemist, and therefore a colleague of mine). In the end the heroine will find her husband again, and move to America for some further adventures.

The selling point of the novels was certainly the strong historical background – the novels are set in the same time as Dumas’ The Three Musketteers, and are filled with historical characters with whom the lovely Angélique gets involved, Flashman-style. But what really sold was the penchant for the aforementioned lovely, not to mention beautiful and virtuous Angélique to get kidnapped, bound, 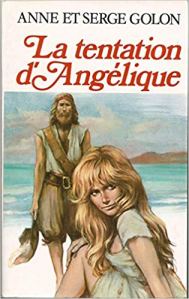 molested, flogged, bought and sold, raped and/or to get physically involved with a number of partners. Even if her love for the guy they called the Lame Devil was never in question.

In this, Angélique was certainly breaking with the past tradition of female heroines – she was a healthy young woman that loved her husband dearly, but really needed a good tumble once in a while, and so, why not?

My flippancy aside, the series was a smash hit, selling something in the range of 50 million copies worldwide with each title, and so they turned the novels into movies – a French/Italian/German production featuring gorgeous Michèle Mercier in the titular role.

The movies softened the hot bits but actually showed a lot, and hinted heavily at what they did not show, considering the first movie came out in ‘64, seven years after the first novel was launched.
Indeed, the movies do not get in deep about the court intrigue, the French politics, the religious wars and what else. But we get to see Angélique au naturel.

In retrospect I can appreciate the production values of the movies, even if I do not like the storylines. I even like the central concept of the series: Angélique was a late Renaissance female version of James Bond, down to the bondage elements. And as some have said, what Bond does would never be acceptable were it done by a woman. The Angélique franchise got some hard times from the censorship commission, and the series of movies ended in ‘68 with the fifth Angélique et le Sultan. 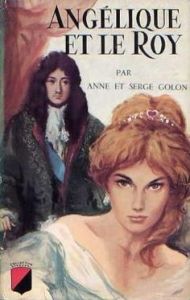 I stand by my original evaluation, but with the wisdom of old age I can now pinpoint more precisely what never worked for me in the movies – Angélique remains an ambiguous character; she is supposed to be strong and in control, but she is too easily swayed by her passions, and in the end is often a victim when she shouldn’t be. I’d prefer her to be a straighter female take on Bond or Flashman. This way, she is, to me, lame. And I wonder whether this is something that is found only in the movies.

You find all five movies on Youtube, in the original French.

As far as I know, the novels never went out of print, and the series was recently turned into a manga-style comic book series.

And I find out now that a new movie was produced in France in 2013 – it might be worth a look, considering it is historical entertainment.

In a totally out-of-the-left-field note, looking for the cover art to illustrate this post, I realized a few of the titles of the Angélique books are the same of the books penned by Joan Wilder in Romancing the Stone – stories featuring the heroine Angelina.
A coincidence? I doubt it.