The Chronicles of Travelstead Get The Chronicles of Travelstead Ashwood Falls on Amazon
Blurb
Man-made weapons are sometimes used as façade, to assuage those who would not understand one important truth; that all battles ultimately are fought not with the handle of the sword or by the power of indomitable strength alone, but by the controlling of the rampant thoughts running through one’s own mind.
Diabolical specters schemed in their secret quarters in the garret above, and the fiercely determined foursome devised a plan to vanquish and destroy the abhorrent Lords of the night, as the vestibule below came alive with a conglomeration of gruesome and perplexing creatures of the night.
Join Travelstead, the gothic warrior from another realm, and his unconventional entourage as they fight the battle of their lives and souls against a secret Coven of Witches lurking in the dark, ancient cobblestone passages of the town of Ashwood Falls.
Mount Crusiaris Asylum: The Chronicles of Travelstead Book Two 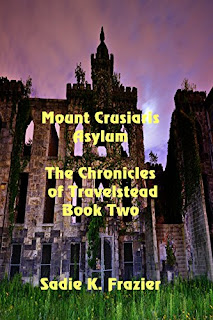 Get Mount Crusiaris Asylum: The Chronicles of Travelstead Book Two on Amazon
Blurb
Join Travelstead, the Gothic, Steampunk Warrior from another realm, and his unconventional sidekick Elden, as they are thrust through space and time, twirling and spinning through a psychedelic portal with brilliant bursts of kaleidoscopic light.
They are sent spiraling out of control into the great unknown, disembarking on yet another adventure to save mankind from itself.
They arrive at their next mysterious destination, amidst a barren, desolate land, placed betwixt and between an alarmed and starkly dismayed assembly of psychologically tormented and oppressed souls. Their hysterically deranged voices echo throughout the corridors of Mount Crusiaris Asylum.
Travelstead is forced to face the demons of his past while attempting to rescue the vexed, phantasmal beings suffering from severe mental afflictions of the mind. They have been psychologically tortured, and cast out from society for being unwell. All that remains is the cryptic shell of their bedeviled beings, teetering on a delicate precipice between life and death.

Will he be able to save them from themselves?
Or will he remain forever ensnared inside his own, tormented psyche for the remainder of eternity?

If he does not take control of the incessant ramblings of his subconscious mind, he may not make it out with his life, or his sanity intact. 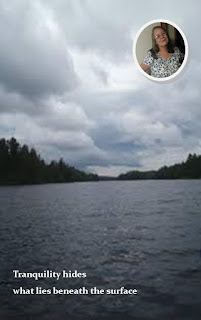 About Sadie K. Frazier
Sadie K. Frazier is a talented, multi-genre freelance writer and inspirational novelist. She is also the creative marketing director of The Crafted Quill Podcast.
Just released 06/07/18!
An emotionally charged, heartwarming love story titled Love, Sam.
Check out her website to see more about this inspirational story of love, loss, and unyielding hope in the face of adversity. It is the legacy of a boy named Sam.
Work in Progress: The captivating romantic drama and sequel to Love, Sam entitled "Saving Grace."

Currently reeling with new ideas awaiting orders to take flight, is her 6th manuscript - Skye Morningside, Metaphysical Examiner: L.O.T.U.S. Project. Stay tuned!
Her debut horror short story, The Chronicles of Travelstead: Coven of Ashwood Falls earned her 3rd place in the Preditor's and Editor's Poll for 2016.
In the 2017 Preditor's and Editor's Poll, The Cusp of Magic, The Indigo Prince of Temple Moor, and Mount Crusiaris Asylum all placed within the top ten novels for their genre.
She plans to move mountains this year while exploring every single crack and crevice of her mind, to see what magic she might encounter.
She aspires to excel as an author whose words change lives. Her purpose is to spread her light to this broken world once again. It only takes one person to bring about change, and she believes that it begins with her!
She is happily married to the love of her life who is also an aspiring published author. She has 5 beautiful kids and 2 grand-babies that she hopes will be inspired by what they are becoming.
As you read her words, allow your mind to wander, to transport you to a place of magic and across the expanse of the universe; a place that knows no time or boundaries, where your soul may wander free, if you will just believe.
Find out more about Sadie’s books at these social media sites:
Website
Twitter
Facebook
Amazon Author Page
Original link