The Consul, the Elephant and the Sarcophagus

This is a story that features an elephant, an Egyptian sarcophagus, and a man that walked the fine line between academia and being an adventurer, all the while serving the French government and his own interests (not necessarily in this order).

I’m putting together the special contents for the SuperDeLuxe Edition of AMARNA, and because of this, and because of an article I’ve written for a Turin-based magazine, I did some digging about Bernardino Drovetti.
Drovetti’s work in Egypt and in Luxor in particular is a central element in the backstory of my serial, and the guy was certainly a character.
You’ll probably remember we had last met him, here on Karavansara, when he sent his men to harass and try to kill Giovanni Battista Belzoni, the archaeologist and adventurer.

But things get a lot more interesting than that, and following Drovetti’s tracks, I stumbled on a number of weird things.

First of all there is the whole matter of Drovetti’s role as French consul in Egypt, first under Napoleon and then for the restored French monarchy. Drovetti became a close friend of Muhammad Alì, the self-appointed Egyptian Kedhivé, and strongly influenced the relationship between France and Egypt.

Drovetti also had a line in animal exports – he provided exotic African animals for zoos and menageries in Europe. Thanks to Drovetti, the Khedivé was thus able to send a giraffe as a gift to Napoleon, and then an elephant to the Savoy court in Turin. The Savoys reciprocated by sending 100 sheep to the Khedivé, once again through Drovetti’s channels.
The elephant was kept in the Savoy country estate, about three miles from where I grew up. They called it Fritz. 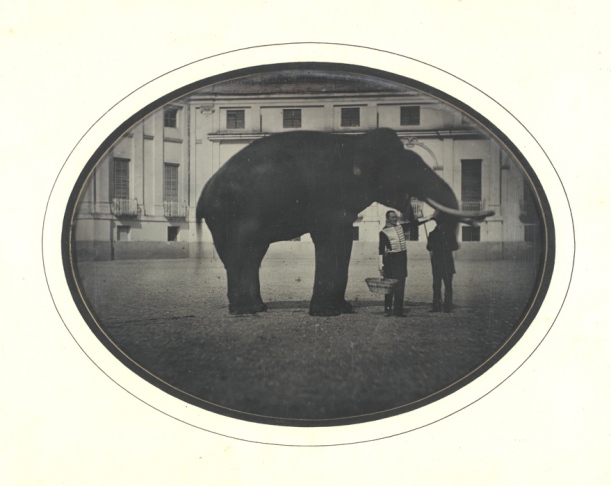 Strangely enoough, Fritz was an Indian elephant, not an African one, but anyway it took to the Piedmontese countryside like a fish to water – king Charles Felix provided for all its needs, including having its skin massaged with eight pounds of butter once a month. Fritz’s diet included a pound of tobacco and an ample serving of red wine.
Fritz was an expensive guest.
The elephant’s maintenance costs became a problem when stringy Victor Emmanuel II succeeded to the throne some twenty years later. Vic hated the elephant, and so had it killed, and donated the stuffed body to the Natural Sciences museum in Turin.

Meanwhile Drovetti kept collecting Egyptian antiques. He worked with Salt, Champollion and Belzoni – but he was ready to sabotage them when they were not working for him. As we saw in a previous post, he sent hoodlums to harass Belzoni, and at least once tried to get him killed.

He sold his collections, three of them, for almost one million francs of the time, and his material basically set up the Turin Egyptian Museum, the Louvre Egyptian Collection and the Egyptian collection in Berlin.

Drovetti travelled, often in the company of explorers and historians. In various occasions visited what he called “many strange places”. Which is vague enough to make it easy to hook him into AMARNA.

Then he retired, travelled through Europe, and finally went mad and died in a loony bin close to where my mother grew up. He was buried in a monumental tomb that looks like a Hollywood version of an Egyptian temple.

But there’s more. Because if it’s true that Drovetti had himself buried in a fake Egyptian temple, it is also true that fifty years later, not far from Drovetti’s tomb, another chap, Giuseppe Parvis, cabinet-maker to the king, got himself buried in an authentic Egyptian sarcophagus, that he had received as a gift from the Khedivé, that had evidently shifted from live animals to bulky pieces of funerary furniture.

The past is a strange place.
You start reading about an Italian solicitor who became French consul in Egypt, and you end up with lots of story ideas.