The Hyborian Cookbook, a Gimmick

The problem with insomnia (yes, she’s here again1) is that while you lay awake in your bed at 4 am, you get the weirdest ideas.
Like…

A series of recipes written in the style of Robert E. Howard at his worst, or his clones and copy-cats at their average.

He flexed his mighty-thewed arms and closed his fist on the eggs. With a swift motion, he cracked them on the rim of the bowl, a sinister sound like the breaking of a human neck.
I let the yolks fall in the bowl and then slashed at them with his fork, blue steel glinting, the fine porcelain from Kithay ringing like a bell as he mixed them.
He added a pinch of salt, from the shores of the Sea of Vilayet. Pepper, from the far-off jungles of Vendya.
…

It would be mindbogglingly stupid, of course, but it would also be the sort of thing some writers seem to be convinced it is necessary to make them popular.
Highly shareable on the social networks, you see.
A gimmick, basically2.

The problem, you see, is that marketing books is extremely difficult. Books are exciting when you read them, not before.
Seldom they are a status symbol.
They are, mostly, a private pleasure, consumed in silence.
So this idea has been floated around, that marketing the writer is easier.
But again, a writer is a guy (or a gal, of course) that sits in a dark room and makes up stories. There is not much in that that’s exciting, or edgy. 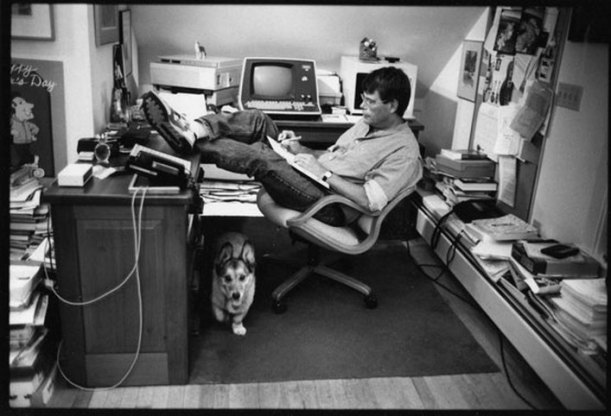 Hence the need for a gimmick.
Like share-friendly posts on the socials, silly or deep posts… like that misguided young woman that posted excerpts of Richard Bach books tagging them as quotes from Lao Tsu. She wanted to look deep, but she was shallow.
Or stuff about the author going tiger-hunting in Bengal, or climbing Mount Whatsisname, or being the last of the Sanada Ninja…
Gimmicks.

It’s all part of building your popular persona, so that people that would never touch your book with a ten-foot pole might be curious enough to pick up one of your ebooks, or maybe support you on Patreon for a few months.

Now the problem with gimmicks is, they are gimmicks, and perceptive people can smell them a mile away, and usually steer clear.
So in the end, if you base your popularity on gimmicks, you will automatically select that part of the audience that falls for cheap tricks, and that’s more interested in how you dress, or what you eat, than in what you write.
Not the perceptive readers.
To some that’s perfectly OK.

But I’m weird (I’m sure we touched on this subject before) and I don’t want to tell you what a swell guy I am, and I don’t want to trick you into thinking I am a swell guy. I want to show you what a swell guy I am.
That’s more or less what I am doing.
OK, what I’m trying to do. Sometimes.
It’s not that I’m really obsessing over it.
And in the end, all that counts, all that’s important, all that remains, is the work one does.
The stories.
Not The Hyborian Cookbook.

I visualize insomnia as a woman. Nervous, super-caffeinated, a little neurotic. Might try and look for a picture of her, and post it here. ↩ yes, before I forget: this post is the first in a new irregular series I am putting up on Karavansara. The series will be called Slug Line, from an old John Hiatt song that pretty much sums up my attitude towards marketing, book marketing and the marketing of myself. I can’t promise it will be a smooth ride, but it might be fun. ↩
Original link
Facebook Twitter LinkedIn Pinterest
How do you feel about this post?
Happy (0)
Love (0)
Surprised (0)
Sad (0)
Angry (0)
Are you prepared to feast with your enemies?
Texas Jewel by Melissa Alexia