Author Spotlights, Interviews & Guest Posts
B. L. Blair
The fifth novella in the Lost and Found Pets Mystery series, The Lost Calico, will be released on Thursday, May 30, 2019. To celebrate, I’ll be posting excerpts from the book on my blog. Answer questions from the excerpts correctly and be entered to win a $10 Amazon Gift Card or a copy of the first book in the series. One gift card and two copies of the book will be awarded. Come back tomorrow to get the answer to the next question. 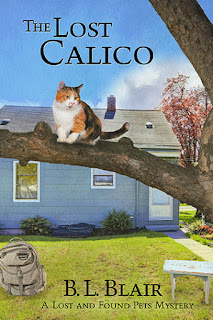 The Lost Calico is the fifth novella in the Lost and Found Pets series. Alexandra Prescott is a licensed private investigator specializing in finding missing animals. Reuniting pet and owner is more than just a job.
Alex is still learning to cope with her new-found family when her half-brother, Wyatt, comes to her for help. His girlfriend, Ivy, is a con artist who has him wrapped around her finger. She also has a missing cat and a secret that threatens her life.
It doesn’t take Alex long to expose Ivy’s secret, but she can’t leave the girl to face the consequences on her own. As events unfold, Alex must deal with the dangers it takes to solve the mystery of the lost Calico.

Amazon**Nook**iBooks**Kobo**Smashwords**Google**
Excerpt 2:
As I stepped through the door, the voices stopped, and all eyes turned toward me. There was a tension in the air I normally didn’t feel when Claire was around. She was good at smoothing ruffled feathers. She gave me a tight smile and tilted her head toward the couple standing in the middle of the room.
I didn’t know the female. She was of average height with beautiful, ginger hair that fell in waves to her shoulders. She had a heart-shaped face with wide, bright blue eyes. The shade was so vivid I suspected colored lenses. Her face was lovely, and her make-up carefully applied. Curvy, with large breasts, she looked like she stepped out of the pages of a girlie magazine. I had no doubt it was a carefully cultivated image. She gave me a sweet smile and blinked innocently.
It didn’t fool me. It was the same look I had seen hundreds of times on my mother’s face when she was working a mark. My mother had been better at it. Of course, she had a lot more practice.
Elise Prescott had been spoiled as a child. Her parents had been in their forties when she was born, and they had been unprepared for the wild, willful girl who had been my mother. When she became pregnant with me at the age of seventeen, her wealthy, conservative parents had disowned her. Elise made her way through life by sleeping with or conning any man who could give her what she wanted. And what she wanted was drugs and alcohol.
My childhood had been…unpleasant. Elise had loved me in her own way, but I was mostly an afterthought. She never taught me how to act or deal with people. I learned how to blend in and successfully mimic those around me. It was the only way to survive, but my social skills suffered. As a result, I tended to be blunt and plain-spoken. Unconsciously, I think I was trying to be as different from my mother as possible, but I recognized a con artist when I saw one.
This girl was good, although she still had a long way to go to master the art. She looked about eighteen, but I was betting she was in her early twenties. One thing was evident. She had the man standing beside her completely fooled.
Like me, he was tall and lean, with a runner’s body. Not muscular but strong and athletic. And like me, he had auburn hair and dark emerald green eyes. His name was Wyatt Bennett, and he’s my half-brother.
Growing up, I had never known my father. He was not listed on my birth certificate, and Elise had never mentioned him. After she died and I came to live with Nora, I wondered if I would meet him, but Nora had not known who he was either.
All that changed a few months ago when I came face-to-face with Nathaniel Bennett. He had recognized me immediately. Facially, I look just like my mother. Same bone structure, same high cheekbones and aristocratic nose, same smile. My eyes were the only facial feature I didn’t inherit from her.
Bennett had been shocked. He hadn’t known I existed. After doing a little research, it hadn’t taken him long to determine I was his daughter, and he wanted me in his life.
a Rafflecopter giveaway
Original link