The sound changed to something else. Fear.

Romance
Uvi Poznansky
If you can not see this chirbit, listen to it here https://chirb.it/b7ftB3

Now, she looked different. Gone were the wavy curls that used to ripple down to her shoulders. Michael was amazed by her new haircut. It was cropped short at the back, with spiky layers at the top. Her eyes looked larger, and there was a new expression in them, which he found hard to define. Sadness? No, something more intense. Rebellion. Against everything, it seemed. Against him, too.

“Such a beauty, she is,” said Ash, pointing at the photograph.

Detecting a hint of jealousy, he said, “Let me explain.”

Where could he start? First, he took a step closer to her. When his lips brushed her forehead, a small cry came from the back of her throat. Was it desire? He thought so at first. But then the sound changed to something else. Fear.

Michael held back a sigh. His heart ached for what she had gone through. The man who had sullied her robbed both of them of their carefree, easy closeness. Now, was she still cautious, still unprepared to be touched?

“Don’t get this close to me,” said Ash, but her blush said otherwise. He had seen it before, in the early days of courting her. It had drawn him closer, till he had found himself lost in the glow of her hazel eyes. Here it was, that same blush, that same glow. Love, all over again.

It gave him hope. Once she healed, things would go back to the way they were between them. Meanwhile, there was the risk of losing her trust. He had to explain how he had gained possession of this photograph.

He said, “This is not what you think.”

“I don’t even know this girl, not really.”

For a split second, her eyes narrowed. “How, then, did you happen to get hold of her picture?” 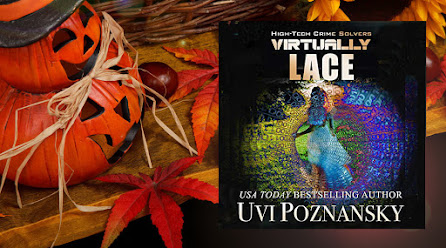 (Volume I of High-Tech Crime Solvers)

Haunted by discovering the body of a beautiful dancer, Michael re-constructs her murder in a virtual reality. Can he bring the mystery to life? Can he solve it in time, before the killer turns on the woman he loves, Ash? 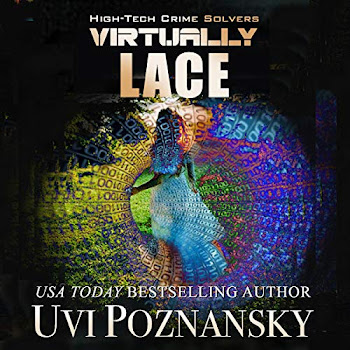 "Virtually Lace is astonishing, very enjoyable. Thank you to Ms. Poznansky for creating this thrill ride, and to the wonderful Don Warrick for his beautiful narration."
J.A. Schneider, author of suspense and psychological thrillers

More posts from author
Friday, 27 November 2020 A tale of courage, enduring love, and secrets kept
Tuesday, 24 November 2020 A Complex Character Study
Sunday, 22 November 2020 I couldn’t afford being recognized for the impostor I was