Good morning and welcome to Sharing Saturday. All through September, we’re taking a peek at some stupendous science fiction authors. I have the fabulous luck to know each of these dedicated, hardworking individuals.
Frederick H. Crook appears today with his tale, The Summer of ‘47. 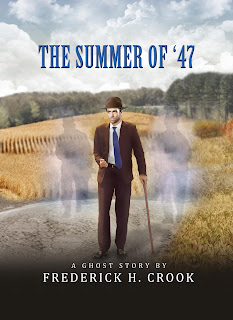 Aron Lakefield served with the Big Red One during World War Two. He’s made the landings in Sicily and Omaha Beach. He’s marched through Italy, France, and Germany. He’s paid a large sum for his pair of Purple Hearts. Aron was the middle child in the Lakefield family until the war came along. Now, at thirty years old, he’s an only child.
After bouncing from one VA hospital to the next for over two years, Aron finally gets to return to his Illinois home. Left with a permanent limp by his experiences, he is also, literally, haunted by them.

Frederick was born in Chicago in 1970 and now lives in Villa Park with his wife, Rae and their three miniature dachshunds. In 2009, Frederick began writing his first dystopian sci-fi novel, “The Dregs of Exodus”, which was self-published in late 2010. This was followed up with another novel, The Pirates of Exodus in 2012.
Throughout that year and early 2013, he published four dystopian novellas in eBook form for Kindle. His third novel, Campanelli: Sentinel, was picked up by Solstice Publishing in 2014, and was quickly followed by his other works, Minuteman Merlin, Of Knight & Devil, Campanelli: Siege of the Nighthunter, and the paranormal historical fiction novel, The Summer of ‘47.
For two years, Frederick served Solstice Publishing as an editor and continues to edit in a freelance capacity and write.