Two weeks into my (first?) crowdfunding

I mentioned a while back that I was starting a crowdfunding for a story I’d be writing – the idea came from a few friends, and it sounded like an interesting experiment.
Two weeks have gone by as I write this,since the beginning of this experiment, and I thought some of you might be interested in a quick overview.

I’m currently 8000 words into a story tentatively called Santi & Fattucchiere – that is, Saints & Witches.
A thriller with some occult elements.
My friends offered as a story seed the idea of writing something set here in Astigianistan, and just as I was digesting the idea, something happened that offered me a story idea on a silver platter: somebody stole the holy relic of St. John Bosco from the church in which it was kept, a few kms from where I live.
The holy relic being the saint’s brain.

Sort of gives you ideas, right?
It certainly did give me ideas.

So I’m speeding through my first draft, while I look around for a suitable cover and enlist beta readers.
This is going to be fast.
So fast, in fact, that the 90+ days of the crowdfunding suddenly look like a lot of time. 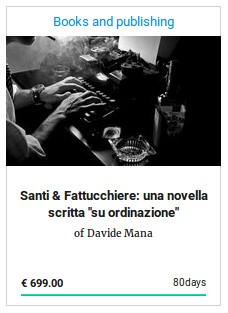 So far, I’ve found thirty sponsors, for a total of 699 euro – which is much more than I imagined I’d collect.
And there’s still 80 days to go.
So, to thank my friends and sponsors (and to attract more sponsors, of course), I decided I’ll do a second story.
I set up a poll on my blog to let my readers suggest a genre or style, and while somebody decided to game the system because … ah, I don’t know, it probably felt like a good idea to them … anyway, it looks like the second story will be a science fiction tale.

So, all in all, the crowdfunded writing experiment looks like a big success, I’m having lots of fun, and there’s still a lot of time to go.
I’ll see how this goes, and then I’ll think again about all those ideas I had and I never developed, like joining Patreon, or doing another, more structured crowdfunding for my English-language stories.
Or something.