Uncharted is both the title of a series of digital games I would have loved to play but never did due to hardware shortcomings and the title of a song I like a lot. This post has nothing to do with either of them (but the song is actually playing in the background as I write this).

In three days it will be the 8th of May, and the third anniversary of my father’s death. The date also marks the moment I became a full-time writer, after a few years spent as a geologist that wrote stories in his spare time. The reason for the shift: no money in the bank, no work, writing to pay the bills turned out to be the only way to keep going.

These three years have been for me a journey through an uncharted territory. I did not have a plan, when I started checking publishers while putting out self-published stories using a variety of aliases, following the old pulp standard of being a lot of people, so I’ll be able to sell more.

In particular I am aware of the fact that I did not have any long term projection of my path. I was not seeing myself, within a few years, taking part at conventions or being interviewed by magazines or radio stations.
I was writing, as professionally as possible, to sell my work, and that was it. It still is. 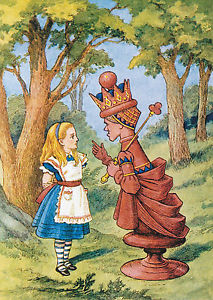 As a result, just like the Red Queen, I have been running for three years basically to stay in the same place. Every new story is like a debut, every proposal to a publisher is like the first proposal from an unknown, untested writer.
I have no brand, no platform, no staying power.
I stop writing for a month and I disappear (snaps fingers) like that.
Utterly perfect, zen-like impermanence.

And yet the stories sell. The articles are requested. I get to do new translations, more gaming material.
And of course one wonders if sales would be better in the presence of a brand, a platform, a chart or a map, a destination that was something more than “pay this month’s bills”.

But on the other hand, this uncharted going is part of what has allowed me to keep moving. Adapt to the territory, jump in a new direction when the path I’ve been following turned into a dead end.
Granted, I am not “the name of adventure” or the first person you think about when somebody mentions a genre or a topic, but this has kept my options open.
Trends and fads fade out.
New markets open while old markets close.
Readers get bored, and distracted.
Aliases die and get replaced.
Also, the time I have not poured into building a brand and developing a platform is time I have put into writing. That’s what I do, after all.

And I’d really love to be able not to do it.
I’m a paleontologist and a geologist, an environmental scientist, a teacher and a researcher. That’s the part of my life that had been carefully mapped and prepared, and much anticipated. I still love what I spent most of my life doing, and I’d love to do it again, right now, for a living, just as planned.
Would I stop writing, were I to get a gig as a geologist tomorrow morning? No, I think I’d keep writing – but in my spare time, with my eyes on other gratifications. I might decide to invest on building a brand or a platform, I might give it a shot at becoming “a name”.
I could draw a map for that.
Not having to worry about bills and survival, having maybe a little money to spend on my hobby, I might even chart that course.
I’d hire help, plot way-points and landmarks, set targets.

But my carefully mapped course fizzed out three years ago and it doesn’t look likely it will resurrect – I’m too old.
What came afterwards was uncharted, and let’s face it, it’s not been a bad show so far.
Were it not for the panic attacks, the anxiety and the payment overdue notices, it would be fun. Thrilling, you know.

And now I’ve just received my accreditation for the Turin Book Fair that will take place on the next weekend.
I’ll go in as “Writer”.
There’s a publisher there that wants to see me about a book.
Everything else remains uncharted.