Wildcat Crew 2 The Case of the Scared Child

Good morning and welcome to wwwblogs. Today, we’re talking about The Case of the Scared Child Wildcat Crew Book 2. The summer solstice provides Wildcat Crew the chance to help Luke Timmons.
A small child wanders on the beach alone...
Scared Child on Spotify
Blurb
The summer solstice has arrived. Being the sun worshipers they are, Wildcat Crew heads to the beach for a day of fun and a picnic. But first, Marnie gets a huge surprise. Her parents have replaced her Camaro, destroyed in their first case.
At the beach with thousands of other Southern Californians, the crew stumbles over a small, crying child. Instead of checking out the waves and working on their tans, they go on the hunt for the little boy’s parents. 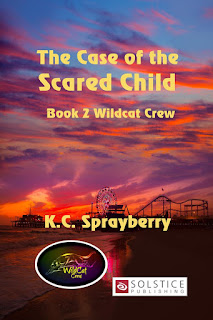 Amazon eBook
Amazon Print Book
Excerpt
Loud voices startled Luke Timmons. He could hear the ocean outside his open bedroom window and wanted to go to the beach. His mommy and daddy had promised him that he could pick where he spent his fifth birthday and he wanted to run into the ocean, build a sandcastle, and have a lot of fun.
“Where’s the stash?” Daddy yelled. “What have you done with it, Liz?”
Luke’s mommy’s name was Liz. His daddy was Brian. The idea of having his mommy crying and his daddy “sick” today made his tummy hurt. They had promised him a really fun birthday of going to the beach, and to get pizza later. Daddy even promised to buy Luke an ice cream cone for dessert if he was good all day long. 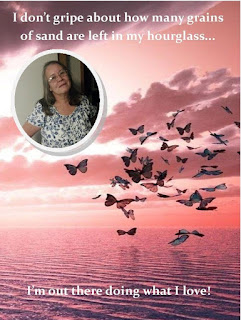 Living a dream she’s had since she first discovered the magic of books, former California native, K.C. Sprayberry traveled the U.S. and Europe before finally settling in the mountains of Northwest Georgia. She’s been married to her soulmate for nearly a quarter of a century and they enjoy spoiling their grandchildren along with many other activities.
A multi-genre author, K.C. Sprayberry is always on the hunt for new stories. Inspiration strikes at the weirdest times and drives her to grab notebook and pen to jot down her ideas. Those close to her swear nothing or no one is safe if she’s smiling gently in a corner and watching those in the same room interact. Her observations have often given her ideas for her next story, set not only in the South but wherever the characters demand they settle.
Find out more about her books at these social media sites:
Facebook Twitter Spotify Goodreads
Amazon Author Page Pinterest Manic Readers AUTHORSdb
MeWe YouTube Authorgraph Email
Original link

Facebook Twitter LinkedIn Pinterest
How do you feel about this post?
Happy (0)
Love (0)
Surprised (0)
Sad (0)
Angry (0)
My dream of being a bestselling author is just a p...
How to Redeem Unredeemed Gifts on Amazon